Is Vietnamese similar to Chinese? 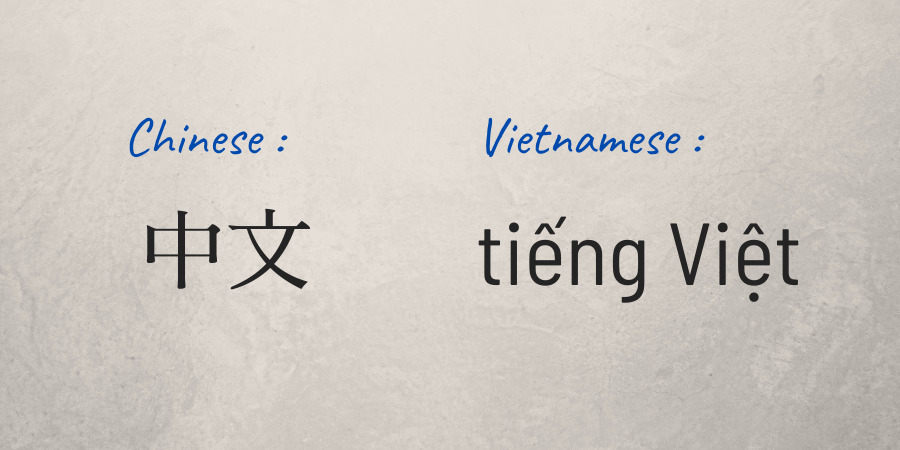 Nevertheless, there are still fascinating similarities in tones and vocabularies that are frequently detected by those who speak both languages.

“Both Vietnamese and Chinese (Mandarin and Cantonese) are tonal languages, meaning that changing the pitch of a word will change its meaning.”

The linkages between Chinese and Vietnamese reveal the complex ways in which languages develop over human history.

Origins of Vietnamese and Chinese languages

Chinese is the oldest written language still in use today. It's spoken across the geographic area of modern China and has up to 10 different regional dialects.

While these dialects are mutually unintelligible, speakers can still understand each other through standardized written Chinese. The most common dialects are:

Vietnamese, on the other hand is the native language of the majority of the population in Vietnam. It belongs in the Mon-Khmer branch of the Austro-Asiatic language family, which also inlcudes some of the major languages of Southeast Asia, like:

There's one single dialect and one common script used across Vietnam.

Modern Vietnamese still has significant Chinese influence through a history of colonialism:

Vietnam continued to fall under Chinese empire rule several times until the modern era. Over time, aspects of Chinese culture, knowledge, and languages were adopted as part of Vietnamese culture.

Later during Vietnam's era of French colonialism, a Latin script system for Vietnamese was developed by Jesuit Catholic missionaries beginning in the 17th century.

Eventually, Vietnam adopted the Latin script over the Chinese script, which made learning written Vietnamese much simpler for later generations.

Are Vietnamese and Chinese mutually intelligible?

Vietnamese and any Chinese dialect are not mutually intelligible. Despite the adoption of Chinese script in Vietnam in the past, they are still two completely different languages in two different families.

Should you learn Vietnamese or Chinese first as an English speaker

If based purely on ease of learning, an English speaker will have an easier time learning Vietnamese because it also uses the Latin alphabet.

Nevertheless, Vietnamese is still difficult for English speakers compared to other languages with Latin alphabets.

In fact Chinese and Vietnamese are both among the hardest languages for English speakers to learn.

The foreign service institute (FSI) classifies Vietnamese as a category 3 language. The categories go from 1 to 4 with 4 being the hardest.

It is estimated that it will take at least 1100 class hours (44 weeks) for an English speaker to learn Vietnamese.

On the other hand, an English speaker will take at least 2200 class hours (88 weeks) to learn either Mandarin or Cantonese. These are classified as category 4 languages (the hardest category for English speakers to learn)

However, many still opt to learn Chinese because it gives them access to at least a billion native speakers, if not counting other foreign learners.

You want to consider plenty of other reasons before choosing which of the two languages to learn. Despite being the more difficult language, there's a lot more material for learning Chinese than Vietnamese out there.

You also want to consider the personal benefits you get when learning each language. For instance, if your job requires you to work with a lot of Vietnamese people, definitely opt for learning Vietnamese, and vice versa.

Similarities between Vietnamese and Chinese

Vietnamese and Chinese are tonal languages

Both Vietnamese and Chinese (Mandarin and Cantonese) are tonal languages, meaning that changing the pitch of a word will change its meaning. This is why the two languages can sound similar to non-speakers.

Is Cantonese or Mandarin more similar to Vietnamese?

Because of geographical proximity, Cantonese, which is spoken in Southern China near the border with Vietnam, sounds more similar to Vietnamese than Mandarin. Both Cantonese and Vietnamese have six tones, while Mandarin has four.

There are many Chinese loan words in Vietnamese

There's a significant number of Vietnamese words with Chinese origins, with the highest estimates at up to 70% of Vietnamese vocabulary. Another study of 1500 words in 2007 lowered that figure to 27%, but its methodology did not include grammatical vocabularies, names, or regional vocabs.

A more comprehensive future study will probably show a number somewhere between 27% and 70%. Needless to say, any number within the range shows a significant influence of Chinese over Vietnamese.

Below are some common words in Vietnamese with Chinese origin:

While these Vietnamese and Chinese equivalence share similar origins, they won't sound much similar to the untrained ears. As such, only people who know both languages well can determine words with common origins.

Most names and name translations in Vietnamese have Chinese origins. Sino-Vietnamese names are derived through the characteristics of the person or place. For instance:

When it comes to proper nouns, like names of geographic locations or attractions, there is a mix of names based on the location's characteristics along with names based on Chinese transliteration.

Name of Countries and Cities based on characteristics:

Name of Countries and Cities based on old Chinese transliteration:

Nowadays, with the prevalence of English globally, people may use the English words for a name instead of their Chinese or Sino-Vietnamese versions.

Differences between Vietnamese and Chinese

As previously explained, Vietnamese intellectuals abandoned the Chinese script and opted for the Latin script in the early 20th century. Some argue that this adoption helped Vietnam increase its literacy rate in the 20th century, but there's been no proof to this claim.

Nevertheless, having a Latin alphabet drastically quickened the process of learning Vietnamese. In the past, people had to learn Chinese first to be able to write Vietnamese in the Chinese script.

This is because Chinese essentially has no alphabet but has a series of characters that either look like what it is describing, combine sound and meaning, or combine together in special ways. Nowadays, Chinese students will know at least 3000 characters before high school.

The differences between the two writing systems become magnified when it comes to typing. The modern keyboard was made specifically for the Latin alphabet, so Chinese speakers faced a massive barrier to computers and the internet.

Chinese developers had to create the Pinyin system, which uses Latin characters to search up Chinese words based on sound, to help Chinese speakers use computers.

Both Chinese and Vietnamese have simple sentences in the form of subject + verb + object. However, different types of sentences have unique variations.

Foreigners who hear the varying tones of Vietnamese and Chinese will wonder if the two languages are similar. It turns out, while the two languages share a lot of history, it's difficult for a speaker of either to understand the other language.

No matter which of the two languages you want to learn, you're on for a fascinating journey into culture and history.

PS: If you are learning a language, you can use our free web application to record your vocabulary lists and phrase lists