The Thai language has been changing constantly over the past decade. You say one word in Thai and it can mean a different thing to the listener.

This is because several Thai words are pronounced and spelled identically but have entirely different meanings. It is also common for Thai people to use the same word to describe other things or ideas. 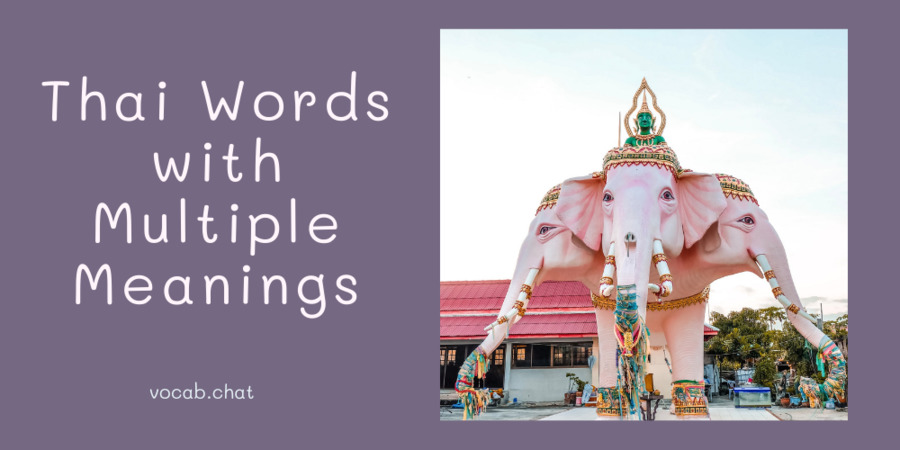 So, how do you make sure that you interpret the word correctly? The simple answer is “Context”.

Thai language relies heavily on the situation where the word is being used at the moment of speaking. Tone and intention of the speaker are crucial elements which help the listener to form the right meaning. The Thai language is context based.

As a language learner, you are not expected to know all the multiple meanings of one word. However, it will come in handy when you want to express your thoughts like a Thai native speaker.

With this in mind, here are the most ubiquitous Thai words which have multiple meanings.

The multiple meanings of the Thai word Kao

The first meanings of Kao (เขา) are pronouns he / him / she / her. Thai people use this pronoun frequently as a subject and object of the sentence.

Thai people add “kong” (ของ) before the pronoun like in the sample “kong kao” (ของเขา) for possessive pronoun his or her.

As Kao refers to a person of an unspecified sex, the speaker and listener are assumed to know the person whom they are talking about to establish the meaningful conversation.

Another meaning of the word Kao is a mountain or a hill.

Kao in the Thai language can also refer to an animal’s horns.

In addition, Thai people also use the phrase “suuam kao” (สวมเขา) to describe a situation when someone is unknowingly being cheated on.

เขาสวมเขาให้ฉัน
(kao suuam kao hai chan)
“He is cheating on me.”

The two meanings of the Thai word Pom

In Thai, male speakers refer to themselves as pom (ผม) which means the English pronouns I, me, and my. A male foreigner can use Pom as well when talking to Thai people.

Another meaning of pom is a person’s hair in Thai.

The multiple meanings of the Thai word Taa

The first meaning of the Thai word taa (ตา) is eyes.

Another common meaning of taa is grandfather.

In Thai, the word Taa also means one’s turn to play something.

ฉันขอเล่นตาต่อไปนะ
(chan kor len dtaa dtor bpai na)
“Can I play the next round?”

The multiple meanings of the Thai word Fan

In Thai, we have a phrase ‘taa tor taa fan tor fan’ (ตาต่อตาฟันต่อฟัน) which is translated to ‘It is an eye for an eye.’ in English.

If fan is used as a verb in Thai, it means to cut or slash something.

Another meaning of fan as a verb is to be scammed by a seller. This is used in a situation when you are scammed to pay a higher price than a normal market price.

The two different meanings of Kaek

The first meaning of the Thai word Kaek (แขก) is a guest or visitor.

Kaek is also commonly used to refer to people who are from South Asia and Middle East, mostly Indian people. Thai people collectively call them Kaek.

The two different meanings of Gluuay

The word gluuay (กล้วย) simply means a banana in Thai

In Thailand, there are over 100 varieties of banana. Each one is called differently. If you don’t know its specific name, you can refer to it as just gluuay.

We have a snack named Gluuay Kaek which means a fried banana.

However, if you repeat the word gluuay twice, it means something that is easy or simple.

Note that ๆ is a special Thai symbol used to indicate the repetition of the previous word when spoken to emphasize the meaning.

Gluuay in the second meaning is a short form of the proverb "bplok gluuay kao bpaak” (ปลอกกล้วยเข้าปาก) which mean something that is easy to achieve, similar to how one can easily remove a banana peel. It’s equivalent to the English proverb “A piece of cake”.

The slang meaning of the Thai word Gaeng

In Thailand, the majority of people eat rice with curry in almost every meal. If you are eating out in a roadside vendor, you will notice that many shops sell “kaao raat gaeng” (ข้าวราดแกง ) which directly translates to rice on top with curry. It costs around 1$ to 2$.

The term Gaeng is recently used as a slang which means ‘to fool or deceive someone’.

Gaeng (แกง) derives from the word Glaeng (แกล้ง) which means to tease, irritate or annoy in Thai because they have similar pronunciations.

The extreme version of this term is “gaeng mor yai” (แกงหม้อใหญ่) used to describe how someone is completely deceived without him/her being suspicious.

The slang meanings of the Thai word Lam Yai

Normally, Lam Yai (ลำไย) is the name of a Thai fruit, longan. Longan is so sweet that some say it will make your throat hurt if you overeat it.

Thai youngsters recently use this term Lam Yai to describe the feeling when they are annoyed with something or someone’s action.

The term also refers to a person who lacks a sense of haste or urgency.

The reason being that the pronunciation of Lam Yai is similar to Ram Kaan (รำคาญ) which is the original word for annoying and annoyed in Thai.

So, lam yai is a less aggressive way of letting someone know that they annoy you instead of directly using ram kaan.

The double meanings of the Thai word Nok

The term nok (นก) is used to refer to an unspecified type of bird in Thai.

However, nok has another meaning. Thai people use the term nok to describe when someone is turned down by their crush or misses his/her chance to move things forward.

Although this term is more common with people in the young generation and on social media in Thailand, you can use it with close friends.

nok dtor (นกต่อ) is another phrase that Thai people to describe a person who misleads or lures someone else into a trap.

The double meaning of the Thai word Kwaai

สมัยก่อนพ่อฉันใช้ควายไถ่นา
(sa-mai gon por chan chai kwaai taai naa)
“In the past, my dad used the buffalo to plow the rice fields.”

The word Kwaai is used as a swear word in Thailand which mean stupid or dump. Thai people use this word to describe someone who is stupid in their opinion.

ทำไมแกถึงยังเป็นควายให้มันหลอกใช้อยู่
(tam-mai gae teung yang bpen kwaai hai man lok chai)
“Why are you so dump and let him use you like this?”

The reason behind the negative meaning of Kwaai is because Thai parents often scare their children that if they do not study hard enough, they will end up like a buffalo in the rice fields, doing the labour work.

The multiple meanings of the Thai word Tay

The term tay (เท) is a verb in Thai which means to pour something.

Another Thai phrase for the term tay is tay naam tay taa (เทน้ำเทท่า). It means to sell something out really well, similar to when you pour the water out of a jar.

Thai people also use the phrase Tay jai (เทใจ) to describe a situation when you like someone so much that you give it all you have including your heart.

ฉันเทใจให้เขาหมดแล้ว
(chan tay jai hai kao mot laew)
“I give all my heart to him.”

This meaning was recently added and used among close friends and Thai youngsters.

Since these multiple meanings rely mainly on the context of when, where, and by whom they are used, the best way of learning them is using these words in a conversation when possible.

Practicing them with your friends or recording the meaning in the Vocab.chat web app is another helpful way for a language learner to understand the underlying meanings of these words.

By Jarupha Pajaitham (Nice)
Jarupha is a Thai translator from a small town called Tak, Thailand. She aims to bridge the gap between Thai and English and bring people closer.
Share