Sanskrit and Latin: The Similarities and Differences between them

Sanskrit and Latin are two ancient languages which are still studied today because they provide access to ancient texts as well as insights into linguistics.

There are some similarities between Sanskrit and Latin because both these languages are part of the Indo-European family of language. This means that they both originate from a common ancestor language called the Proto-Indo-European language (PIE).

Although there are similarities between Sanskrit and Latin due to their common origin, there are also some interesting differences between them which we will point out along the way.

One of the first things we notice when looking at Latin and Sanskrit vocabulary words are the vowels.

In Sanskrit, the vowel 'a' seems to appear very frequently, while the vowels 'o' and 'e' seem to be much less frequent. In Latin, this doesn't seem to be the case.

That was just a small sample of Sanskrit and Latin vocabulary words. Now let's take several thousands of the most frequently occuring words in both languages. The results are plotted below: 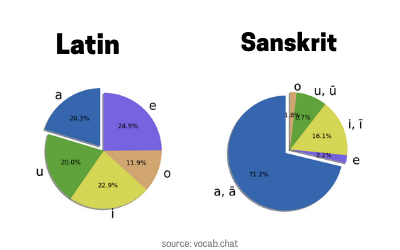 Sanskrit differs significantly from Latin in the frequency in which the different vowels appear.

The sanskrit language makes significant use of the vowel 'a', while the vowels 'o' and 'e' appear rarely. In Latin, each vowel appears with relatively similar frequency.

For this comparison, we restricted ourselves to the vowels which also exist in the English language (a, e, i, o, u). Sanskrit has additional vowels. In particular 'r' can be a vowel in Sanskrit.

Sanskrit and Latin similarities in vocabulary

Latin is not derived from Sanskrit, nor is Sanskrit derived from Latin. Both Sanskrit and Latin have a common ancestor language: the Proto-Indo-European language.

The Proto-Indo-European language is not spoken anymore and there are no written traces of it. It is a language which has been re-constructed by linguists based on linguistic patterns.

Words which are similar between Latin and Sankrit come from this Proto-Indo-European language.

For example, “fire” is « अग्नि » (agní) in Sanskrit and « ignis » in Latin. These words are similar because they are both descendants of the Proto-Indo-European word « hagnís ».

Another example: The Sanskrit word for “man” which is « वीर » (vīra) is similar to the Latin word « vir » which also means “man”. These words are etymologically related as they both descend from the Proto-Indo-European word « wihrós ».

A 3rd example: The Sanskrit word for “gift” which is « दान » (dāna) is similar to the Latin word « dōnum » which also means “gift”. These words are both descendants of the Proto-Indo-European word « déhnom ».

Here is table with some words which are similar between Sanskrit and Latin:

In linguistics, cognates are pairs of words from two different languages which have been derived from a common parent language.

Grammar-wise there are some interesting similarities between Sanskrit and Latin.

Sanskrit and Latin are both highly inflected languages: in both these languages the endings of words change to indicate grammatical cases.

In contrast to the English language where articles ("the", "a", "an") are among the most common words, one noteworthy similarity between Latin and Sanskrit is that articles don’t exist in these two languages.

Classical Sanskrit has much longer words than Latin

In Sanskrit, compound nouns can be formed. In the earlier form of the Sanskrit language (Vedic Sanskrit), noun compounding was not that frequent, but in later periods (Classical Sanskrit) noun compounding became used a lot.

So much so, that the longest word featured in the Guinness book of world records, is a Sanskrit word.

That word - which appeared in a 16th-century text - is composed of 195 Sanskrit characters (428 letters when transliterated into the Latin alphabet). That makes it the longest word to ever appear in worldwide literature

In contrast to Sanskrit, Latin does not have this tendency to construct very long words. In Medieval Latin, the longest word to appear in a text is only 23 letters long.

Should I learn Sanskrit or Latin?

Sanskrit and Latin are both ancient languages which people still learn today. One of the reasons for this is that these languages give access to a wide range of important ancient texts.

Learning Sanskrit gives access to reading many works in their original text, including the following:

Learning Latin gives access to reading many works in their original text, including the following:

The six Romance languages (French, Italian, Spanish, Portuguese, Romanian, and Catalan) are derived from Latin. So learning Latin will give you insights into these languages.

On a related note, we have previously looked at the similarities and differences between Italian and Latin, as well as those between Latin and French.

The Sanskrit language is relatively closely related to several languages including Hindi and the Pali language.

Sanskrit and Latin are both among the most studied ancient languages, and both are good choices for anyone with an interest in linguistics.

However, these two languages are still quite different from each other: they are far from being mutually intelligible. This means that someone who knows one of these languages will not be able to understand the other one without studying it.

A related resource is this list of the most common Latin words .

By David Baker
David has a PhD in mathematics and knows French, English and German. His interests include linguistics, computer science and literature.
Share