Lithuania and Poland are neighboring countries which share a border. But how similar are their languages, Lithuanian and Polish? Let’s find out.

Polish and Lithuanian have in common the use of the Latin alphabet, and both languages have some additional letters which are not found in English. 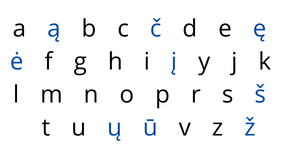 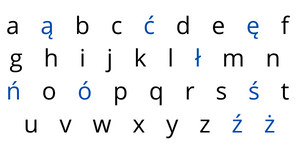 One similarity between the Lithuanian and the Polish alphabet is the use of the ogonek, which is a hook placed below the lower right corner of a vowel.

While Polish uses this mark under two letters (ą, ę), Lithuanian has 4 letters which use this mark (ą, ę, į, ų).

Lithuanian has letters which have a caron, also known as a “háček”: (č, š, ž). The Lithuanian language borrowed these letters from Czech.

The letter ‘w’ is very common in Polish vocabulary words, but it is not part of the Lithuanian alphabet. In fact, 25% of the 1000 most common Polish words contain the letter ‘w’.

Here are some examples of Polish words which contain the letter ‘w’:

Here are some examples of Lithuanian words which contain the letter ‘v’:

The letters ‘q’ and ‘x’ are neither used in Polish nor in Lithuanian vocabulary words. These letters are however sometimes included in the Polish alphabet to accommodate foreign words.

A historical link with linguistic implications

This historical connection led to an increase in the influence which the Polish language and the Lithuanian language had over each other.

Lithuanian and Polish are both part of the Indo-European family of languages. But so are most of the languages which are spoken in Europe (some notable exceptions include Estonian and Finnish as well as Hungarian). 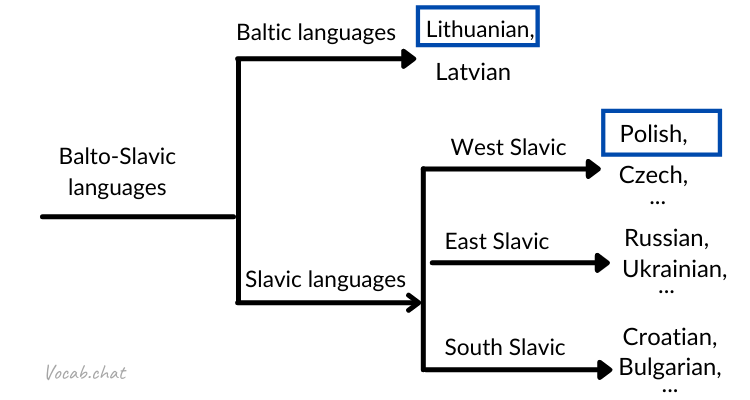 Looking at the similarity between Polish and Lithuanian, we see that they are related - but only moderately.

For most common vocabulary words, there are not many similarities between Lithuanian and Polish.

Consonant clusters are harder in Polish than in Lithuanian

Polish is a language which is known for having consonant clusters which are difficult for non-native speakers to pronounce. Here are some examples:

Dropping pronouns in Polish vs. Lituanian

Polish is a pro-drop language, which means that personal pronouns can often be omitted when they can be inferred from the context.

Lithuanian is a moderately pro-drop language, which means that this occurs as well (but less often than in Polish).

Spanish for instance is a well known pro-drop language. In Spanish the phrase “I love you” is typically worded as “Te quiero” (and not “Yo te quiero”).

The following example shows this same phrase in Polish and Lithuanian:

The pronoun is omitted from the Polish phrase, while it is present in the Lithuanian phrase.

Grammatical cases in Polish and Lithuanian

Polish and Lithuanian are similar in their heavy use of grammatical cases. This makes them difficult languages for English speakers to learn.

Lithuanian and Polish both have several grammatical cases:

We will use these 3 in the examples below, but these are not the only ones. Lithuanian and Polish also have the genitive case, the instrumental case, the locative case, and the vocative case.

In Lithuanian and Polish, the endings of nouns change depending on the grammatical case. In these languages the dictionary form of a noun will not necessarily be the form which the noun has when used in a sentence.

Here are some examples which show how Lithuanian and Polish nouns are inflected according to grammatical case when used in sentences:

There are several declension patterns in Lithuanian and Polish depending on the noun’s gender and its ending.

Another thing is visible in the examples above - that is the absence of grammatical articles in both Lituanian and Polish.

As a reminder, Grammatical articles are those frequently used words in English (the, a, an).

Polish and Lithuanian are not mutually intelligible. This means that a Polish speaker (with no prior knowledge of Lithuanian) will not be able to understand Lithuanian (and vice versa).