Polish and Russian: are they similar or very different languages?

Polish and Russian are often considered very similar. They are both Slavic languages and they both belong to the Indo-European languages family. Without a doubt, these languages have a lot in common and they may sound very similar to someone who doesn’t speak either. 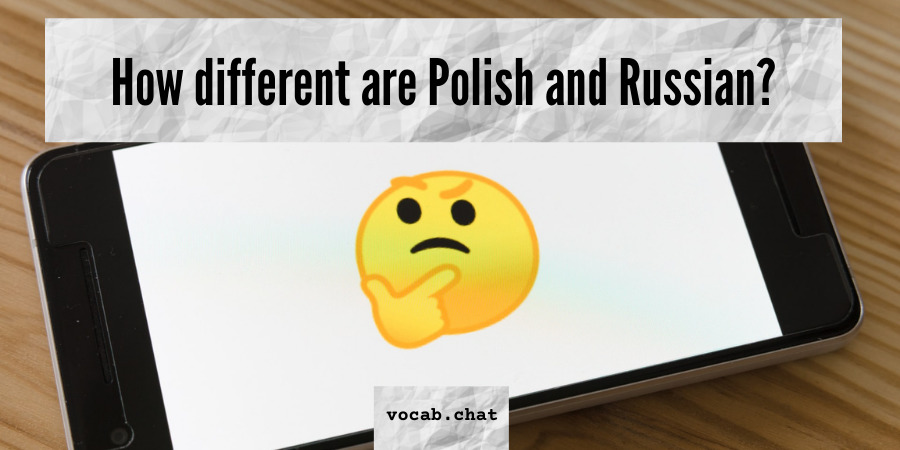 But as similar as they may be, there are also a lot of differences between these two Slavic languages. So, how different and how similar are Polish and Russian? This is the question we will answer in this article.

Origins of Polish and Russian

Polish is only spoken in Poland and in the Polish communities formed in foreign countries by the Poles who have emigrated from their country. The Polish language is spoken by over 50 million people and it is considered to be the sixth most spoken language of the European Union.

Russian has a whooping number of 258 million speakers around the world and it is the most spoken native language in Europe. This doesn’t sound very surprising if we consider the fact that Russian is the official language of four countries (Russia, Belarus, Kyrgyzstan, and Kazakhstan) and an unofficial language spoken in Ukraine and the countries that used to form part of the Soviet Union (Azerbaijan, Estonia, Georgia, Latvia, Lithuania, Moldova, Tajikistan, Turkmenistan, and Uzbekistan).

Although Polish and Russian belong to the same language family, we can’t forget that they belong to different groups. Russian belongs to the East Slavic language group, together with Ukrainian and Belarusian. These two languages are even more similar to it than Polish is. Polish, in turn, belongs to the West Slavic language group, together with Czech and Slovak, which are almost identical in many aspects.

Are Russian and Polish mutually intelligible?

In linguistics, mutual intelligibility describes languages or dialects that are so similar that the speakers can understand each other without the need to learn the language of the other person. It may seem that Polish and Russian are mutually intelligible because they both come from the same language family and share a lot of similarities.

Given that Polish and Russian belong to different groups under the same language family, we can deduce that these two languages share a lot of similarities but also have many differences. Therefore, they are not mutually intelligible.

Is Polish or Russian easier to learn for anglophones?

Answering this question comes down to figuring out how different these two languages are from English. English is a Germanic language, which is entirely different from the Slavic languages. It is safe to say that neither Polish nor Russian have anything in common with English. Their grammar is completely different and they have very few words that are similar to English.

However, the Polish language uses the Latin alphabet while the Russian language uses the Cyrillic alphabet. So, a Russian learner would have to learn 33 more signs to be able to read and write in this language. This alone makes Polish easier to learn for anglophones.

Another question to ask before deciding which one of these languages is easier for an English speaker to learn is how long it takes to learn Russian or Polish. According to the US Foreign Service Institute, both Russian and Polish belong to the Category IV languages. This means that it would take around 44 weeks or 1100 hours of study to learn to speak either one of these languages fluently.

But however precise this calculation may be, it doesn’t take into account a few key factors that will differ for everyone. For example: do you already speak another Slavic language? Do you have a talent for learning languages? How enthusiastic and motivated are you to learn these languages? The answer to these questions will determine how much time it will take you to learn Polish or Russian as well as how difficult learning them will be for you.

Which one should you learn first: Polish or Russian?

It is up to you to decide which language you want to learn first. Russian may seem like the obvious choice because it has more native speakers and it is one of the most important languages of Europe. However, it might be harder to learn than Polish for an English speaker, due to the fact that it uses the Cyrillic alphabet. Polish may be an easier choice to get started with as it uses the Latin alphabet. Neither one of these languages is by any means easy to learn, but once you learn one you can easily learn the other.

Similarities between Polish and Russian

Polish and Russian belong to the same language family and share a lot of similarities. Here are few things that these two Slavic languages have in common.

As a Polish speaker who has been learning a little bit of Russian, I can say that the vocabulary between these two languages is quite similar, but sometimes you just have to make an effort to associate Russian words with their counterparts in Polish.

For example, the word “kiedy” in Polish, which means “when” in English, is “когда” [pronounced: kogda] in Russian. While it is not the same at all, there’s a slight degree of similarity, which makes learning the Russian vocabulary easier for a Polish speaker, and vice versa.

Polish and Russian grammar is very similar, but there are still some differences that make the Russian grammar a tiny bit easier. The most distinctive grammatical issue that both of these languages share is the declension of cases for nouns and adjectives. This means that words will come in different forms, which are created with endings corresponding to the specific case used in the sentence.

In both languages, nouns and adjectives have cases and numbers. Also, both in Polish and Russian the verbs have persons, numbers, and numerous tenses.

In general, the grammatical structure of the language is very similar, although there are many minor differences in the details. These are discussed below.

The sounds in Polish and Russian are quite similar, although not at all the same. Polish accent sounds harsher than the Russian accent, which tends to be quite soft. Also, Russian has fewer phonetic changes than Polish, which tends to apply many transformations to its words. For example, the word “leg” in Polish is “noga” but used in the locative case will become “nodze”. In Russian, such phonetic change doesn’t occur at all and “нога” [noga] becomes “ноге” [nogye]

Here are a few examples of phonetic similarities between Polish and Russian:

Differences between Polish and Russian

Even though Polish and Russian belong to the same language family and share lots of similarities, there are also many differences between these languages.

The most distinctive difference between Polish and Russian is the alphabet. The Polish language uses the standard Latin alphabet with 9 added letters that only exist in this language. You may have seen Polish words being spelled with letters such as “ć”, “ę” or “ż”.

The Russian language uses the Cyrillic alphabet, which is very unfamiliar to English speakers. This accounts for an added difficulty for Russian learners.

Another important difference between Polish and Russian is the pronunciation and accent. While there are many similarities in the phonetics of these two languages, there are also substantial differences that make both of these languages have a completely different sound.

Russian pronunciation is softer than the Polish pronunciation and a lot of times, the words are also accentuated differently. For starters, Russian palatalizes its sibilants very differently from Polish. For example, the sounds ś, ć or ź in Polish account for the Russian сь, ть and зь but have a completely different sound.

Another difference in the phonetics of these two Slavic languages is that Russian has vowel reduction in unstressed syllables, while Polish has fixed stress, less vowel allophony, and two nasal vowels (ę and ą).

As far as the pronunciation, in Polish the stress is normally placed on the penultimate syllable of a word while the Russian language has free emphasis. This often means that it is quite impossible to know which syllable of the word to emphasize unless you hear it spoken to you.

Although the grammar of Russian and Polish is very similar, there are still many differences that are worth mentioning. Here are a few most prominent grammatical differences between these two Slavic languages.

From the point of view of a foreigner, Russian and Polish may sound very similar. They might even say that there are no differences between these two languages or find it very hard to distinguish them from each other, especially while spoken.

However, if you speak one or the other, you can easily notice many differences between these two languages. Even though there are similarities in vocabulary, grammar, and phonetics, there are many more differences to be found when you dive deeper into the details and specifics. As we say in Polish “diabeł tkwi w szczegółach” the devil’s in the details!