Are Polish and Czech Similar or really Different?

Both Polish and Czech belong to the same subgroup of the West Slavic languages. This means that they are very closely related, and therefore, they share a lot of similarities.

But, how similar are they? What are the differences between them? These are the questions that we will answer in this article. We also included some audio recordings so that you can hear the differences in pronouciation between Polish and Czech.

Origins of Polish and Czech 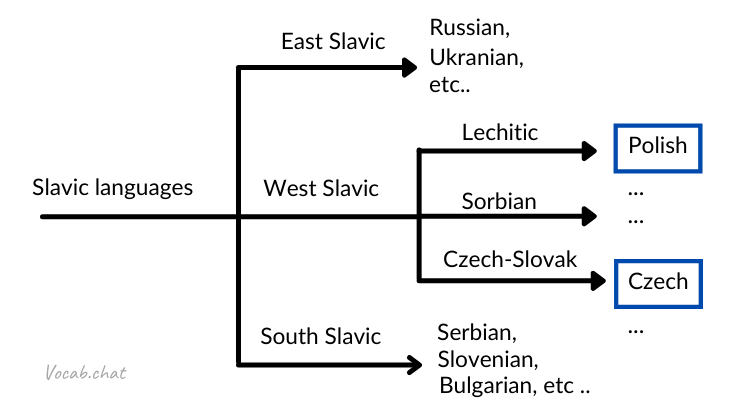 However, as a result of tribe migrations, this language started to evolve and divide itself into various dialects and later into separate languages. This is how the Slavic language group came to be and divided into three subgroups: West Slavic, East Slavic, and South Slavic language.

Furthermore, the West Slavic languages divided into three subgroups: Czech-Slovak, Lechitic, and Sorbian. The Czech language belongs to the Czech-Slovak subgroup together with Slovak (which is why Czech and Slovak are mutually intelligible), while Polish falls under the Lechitic group.

Both the Polish and the Czech languages almost disappeared entirely due to historical events. In the 17th century, the Czech language suffered a near-extinction after the outbreak of a thirty-year religious war. Due to the war, the population of the Czech Republic fell significantly, together with the linguistically-gifted elite.

Nevertheless, the Czech language stayed alive in the countryside, being taught from one generation to another, mostly in speech. Although the language lingered in the minds of the Czech population, it wasn’t until the 18th century that it was fully revived.

As for the Polish language, the history was very similar. Poland had endured a tough period of 123 years when it completely vanished from the map of the world due to the Third Partition of Poland in 1795 by three power nations: Austria, Prussia, and Russia.

Nowadays, approximately 11.5 million people speak the Czech language, out of which 10 million are Czech Republic residents. It is most closely related to Slovak and then also to Polish, Kashubian, and Lusatian.

Polish is spoken by approximately 44 million people worldwide, mainly by Polish residents and Polish people living abroad. It is the sixth most spoken language of the European Union and one of its official languages.

How Polish and Czech influenced each other

The similarities in the vocabulary of these two languages come mostly from historical events. To start with, Poland adopted Christianity through the Czech Republic in the year 966, when the first Polish King - Mieszko I - married a Czech woman called Dobrawa (Doubravka in Czech) from the Přemyslid dynasty.

Apart from Christianity, this international union also introduced new vocabulary into the Polish language. This is why many words in Polish originate from the Czech language, such as Polish “kościół”, which comes from the Czech “kostel” and means “a church”.

Later on, in the Middle Ages, the Czech language became very popular in Poland. Almost everyone who belonged to an intellectual circle spoke Czech. This created a fashion for the Czech language, which originated in many lexical changes in the Polish language.

For example, Polish words that contain the particle “ra” or “ła” between the consonants, such as “brama” (gate) or “błagać” (to beg), typically originate from the Czech language.

Are Polish and Czech Mutually Intelligible?

When two languages are mutually intelligible, it essentially means that the speakers of one language can easily understand the other language without the need to learn to speak it.

Although Polish and Czech belong to the same subgroup of Slavic languages and share many similarities, they are not mutually intelligible. Linguists claim Czech’s oral intelligibility with Polish is only 36% and written intelligibility 46%.

However, Poles and Czechs are able to learn to understand each other’s language exceptionally quickly based on how much exposure to that language they are experiencing.

This is why many Polish people who live close to the border with the Czech Republic can easily understand Czechs and vice versa.

Is Polish or Czech easier to learn for anglophones?

Although Polish and Czech may have a lot in common, there is no doubt that they are incredibly different from the English language. Both Polish and Czech share complex grammar that differs a lot from English grammar.

They are both hard to pronounce for an English speaker with lots of sounds that simply do not exist in English, and their vocabulary has nothing in common with the English vocabulary.

What’s more, both Polish and Czech are categorized as level IV languages according to The Foreign Service Institute. This means that learning them at a basic conversational level requires at least 1,100 hours of study (or 44 weeks).

However, if you already have some background in another Slavic language, or you’re just a language lover who finds it easy to learn foreign languages, learning Polish and Czech may not be so difficult for you.

Similarities between Polish and Czech

Although we cannot say that Polish and Czech are identical or even mutually intelligible, there is no doubt that they share many similarities. Coming from the same language group and subgroup, these two languages share a similar grammatical structure and vocabulary.

With that said, let’s take a look at the similarities between Polish and Czech more closely.

Polish and Czech follow a very similar general grammatical structure. For example, both of these languages use declension.

Declension, which is entirely unfamiliar to any English speaker, is a complex system of grammatically determined modifications of nouns, adjectives, pronouns, and numerals.

Both Polish and Czech have seven cases: nominative, genitive, dative, accusative, instrumental, locative, and vocative. They also share many similarities in the conjugation of verbs, the use of tenses, or the use of prepositions.

The most prominent similarities between Polish and Czech are in their vocabulary. The similarities in the lexical development of these languages are caused by the inheritance of words from the Proto-Slavic language (which is one of the dialects the Proto-Indo-European language developed into during tribe migrations).

It is estimated that Polish adopted approximately 1,700 words from the Proto-Slavic language. In comparison, the Czechs incorporated about 2,000 words into their vocabulary - most of which are words common to both languages.

Here are a few words and expressions that sound very similar in Polish and Czech:

Differences between Polish and Czech

Let’s take a look at some significant differences between Polish and Czech.

Although Polish and Czech may sound almost indistinguishable to a foreign ear, the most significant differences between these two languages lie in their phonetics.

To start with, the Polish consonant system is relatively complex, while the Czech version is fairly simple.

On the other hand, the vowel system in Polish is straightforward (it has only six oral monophthongs and two nasals). In contrast, the Czech vowel system is more developed (it has ten monophthongal and three diphthongal vowel phonemes).

What’s more, the Czech language does not have nasal vowels as Polish does. Czech distinguishes long and short vowels, while Polish doesn’t. Additionally, Polish preserved the phonetic difference between 'i' and 'y', while in Czech, they have merged into one single vowel.

Another big difference in how these two languages sound is the pronunciation stress. In Polish, the stress is usually put on the next-to-last syllable, while in Czech, the first syllable of a word is stressed.

Although Polish and Czech follow the same grammatical structure, there are some differences in the details.

For example, both Polish and Czech use declension of nouns, pronouns, adjectives, numerals, and the conjugation of verbs, but their grammatical modifications differ significantly.

The sentence syntax also differs between these two languages as the word order in Czech sentences is not precisely the same as in Polish sentences.

Although Polish and Czech share a considerable percentage of their vocabulary, there are also many significant differences that Poles and Czechs need to pay attention to when communicating with each other!

You may often hear Poles and Czechs telling stories of how using similar-sounding words in each other’s languages created funny situations and complete misunderstandings. This is because Polish and Czech have a lot of false friends: words that sound similar but are very different in meaning.

For example, in Polish, the word “zachód” means West, while the very similar-sounding “záchod” means toilet in Czech!

Another funny example is the Czech word “divadlo”, which simply means “theatre”. Whereas In Polish, the word “dziwadło” means “a freak”!

Here are some examples of false friends in Polish and Czech:

There are also significant differences in the spelling and orthography of the Polish and Czech languages.

A dash in Polish is placed above certain consonants (ć, ń, ś, ź, dź) to denote their softness. The only vowel that appears with a dash is “ó”, pronounced the same way a “u” is. In comparison, in Czech, the vowel “u” is marked in two ways: either with a dash (ú) or with a circle (ů).

Another critical difference is that the Czech language uses the so-called “hook” (from Czech “háček”) above certain consonants (č, ň, ř, š, ž) and the vowel “ě”. This doesn’t exist in the Polish language.

Most people believe that Polish and Czech are two very similar, almost identical, languages. It may be practically impossible to distinguish between these two Slavic languages to an untrained ear.

While it’s true that Polish and Czech developed simultaneously and share a lot of similarities, such as their grammatical structure and vocabulary, many differences between them make them into two completely separate languages.