How to compliment a guy in Korean:20 examples explained

Complimenting guys in Korean can sometimes be a tricky affair, but it’s not so hard once you have some great phrases at your disposal for diverse situations.

This guide will teach you how to compliment a guy in Korean, while providing a list of 20 Korean compliments for various situations.

How to compliment a guy's appearance in Korean

These Korean compliments are based on a person’s appearance, and are recommended for male colleagues, friends, and acquaintances that you have a personal relationship with.

These compliments are not suitable for someone who you need to be formal with, such as your boss or teacher - unless you are already quite friendly with them.

This Korean compliment lets your male acquaintance know how nice he looks today, due to his great sense of style.

Did your male colleague get a haircut recently? Ask them about it and tell them that it suits them well. For friends, simply drop the 요 ‘yo’ at the end of each sentence to make them informal.

Notice a new piece of clothing on your male seonbae (senior)? Tell them their new clothes look cool and lead into it naturally by asking them where they bought it first.

This is quite a direct compliment to tell a male acquaintance that they are very handsome which can be followed by telling them that they are your ideal type.

While it is not too common to be so direct with giving such compliments or when showing romantic interest in Korea, it could be suitable in certain situations, such as flirting online, or perhaps you can use the power of alcohol as a cute excuse for your forwardness.

In Korean, this is a common way to compliment someone you think is very good-looking, especially if you think they resemble some celebrity in particular.

You can give this Korean compliment to a male acquaintance, a friend or a romantic interest, and is a compliment indicating that they are a very attractive person due to their unique appearance or character.

Don’t worry if you are not attracted to them yourself, you can still use this compliment to someone even if you don’t have any romantic interest in them.

This Korean phrase can be used to compliment the appearance of someone who you just met, whose face gives the ‘impression of a kind and gentle person’ (insang).

Usually older people tend to use such compliments more than younger people, but you can still use it to let someone know that you got a good impression from them.

This is a Korean compliment that can be used for guys who are muscular and fit and is an indirect way of saying that they have a great body.

This Korean phrase can also be used to compliment a guy’s body, by complimenting them on their naturally tall height and broad shoulders.

Korean compliments for a guy's skills:

You may use the following Korean compliments for anyone - acquaintances, friends, or romantic interests, and some can also be used for your seniors such as your boss or teachers as a way to gain favor with them, but be careful and learn to read the room because if you overdo it, you may just end up annoying them!

Also don’t forget to use the more formal suffixes when addressing your higher-ups which usually end with the longer “~ 세요” (seyo).

Has your male acquaintance just demonstrated a surprise skill that you didn’t know about such as baking a beautiful cake or building a computer from scratch? Let them know by commenting on how amazing it is to you.

Save this Korean compliment for those super multi-talented guys who are great at many different things at the same time, such as excelling professionally but also being able to speak multiple languages, playing a musical instrument proficiently, while also being a fantastic tennis player. You get the idea.

This Korean compliment has a general scope, so it can be used in many situations where a guy has done something especially cool, such as scoring an amazing soccer goal, or perhaps generously offering to pay for the dinner for your whole group of friends.

This Korean compliment is for those guys who you think are “Mr. Capable” (“Neunglyukja” in Korean), who are able to get difficult things done easily through their various skill sets or by having the right connections.

This Korean compliment can be used for guys that seem to have a great sense of intuition and usually say or do the right thing at the right time, such as giving that perfect compliment or gift.

This is one of the top qualities that Korean girls want from a guy, to have “senseu” because otherwise they tend to be rather clueless to the subtle clues given to them and often end up saying or doing the wrong thing.

You can give this Korean compliment to your acquaintances who seem to be smart and diligent, and who you think are/ were good students in school.

This Korean compliment can also be given to the extra smart guys in your life by letting them know that you think they’re very intelligent.

It is not recommended to make such comments on intelligence for your bosses or teachers though as it is usually rather odd for a junior to make such a statement to a senior.

How to compliment a guy's character in Korean

Finally, we will look at some Korean compliments for a person’s character or personality, which are mostly reserved for your peers or friends, not for your elders or used in formal relationships.

Use this Korean compliment for a guy who you think is hard-working and dedicated, as it is considered a very good quality in a person in Korea.

This is a great Korean compliment for those who seem to be a wonderful and dutiful child towards his parents.

This Korean phrase is particularly suitable if you just found out that they recently treated their parents to a nice holiday or that they send money back home every month, etc. Being a “hyoja” is a very highly regarded character trait in Korea.

Let your Korean friend know that you think he is a kind and generous person with this compliment. It can be used for both old and new friends and even romantic interests when you want to express appreciation for how nice of a person they are.

This is a very strong Korean compliment that can be given to anyone you think has the character of an exemplary human being, such as someone who gives back to one’s community or does other commendable acts you think are worth praising.

If you want to compliment a close friend or people younger than you, you can use the term “훌륭한 사람” (hoollyoonghan sa-lam) instead of “훌륭한 분” (hoollyoonghan boon), because “분” (boon) is a more formal and respectful term for person or “사람” (sa-lam).

Thus concludes the 20 compliments you can use for guys in Korean! Which one was your favorite? 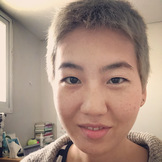 By Minjoo Noh
Minjoo is a native Korean and English bilingual originally from South Korea. She has traveled to 40 different countries and can speak fluently in 4 languages. Her passions include writing, art, music, nature, and spirituality.
Share