Romanian and Italian: are they similar or very different languages?

Just like Italian, Romanian is also a Romance language. This means that both Italian and Romanian are derived from latin.

The fact that Romanian is a Romance language surprises some people, because slavic languages are spoken in many of the countries around Romania. 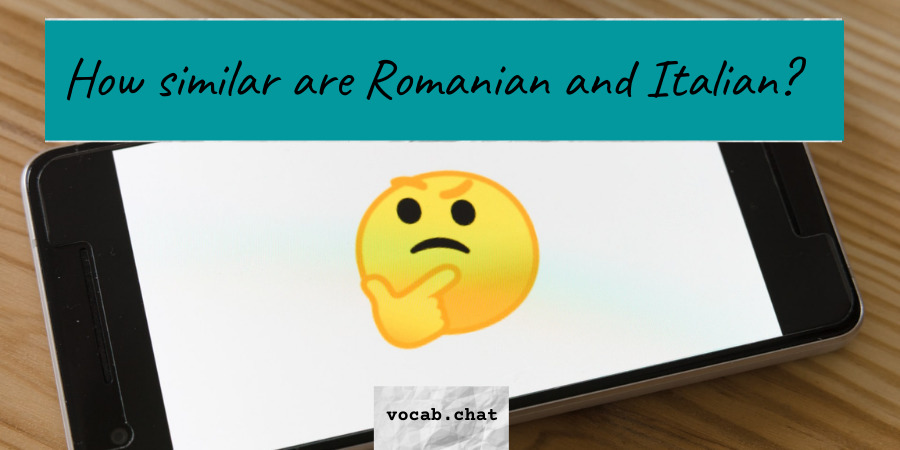 In fact, the Romanian language has been influenced by slavic languages to some extent. This raises the question: To what extent are Romanian and Italian similar, and in what ways are they different?

To compare how similar two languages are in terms of their vocabulary, linguists use the concept of lexical similarity. It provides a numerical value which indicates to what extent the vocabularies of the two languages are alike.

The lexical similarity coefficient between Romanian and Italian is 0.77

Here is a list of vocabulary words that are similar in Romanian and Italian (and quite different from their English equivalents):

What are the main differences between Romanian and Italian?

Even though lexicon was one of the highlights in the similarities section, there are still some words that are nothing alike between Romanian and Italian which may cause confusion.

A few examples of words that are significantly different are:

Romanian (unlike Italian) has many words of slavic origin:

Similarities and differences between the Romanian and Italian alphabets

As English-speakers, we are familiar with the English alphabet and its 26 letters (a-z). Interestingly, although English is a Germanic language and not a Latin language, it still uses the Latin alphabet.

The English language (and other Germanic languages) adopted the Latin alphabet in the early middle ages when Christianity spread to the north of Europe.

Romanian and Italian having both evolved from Latin, unsurprisingly use the latin alphabet as well.

Italian uses a variant of the Latin alphabet with only 21 letters the 5 letters (j, k, w, x and y) are not part of the proper Italian alphabet but do appear in foreign words which Italian has incorporated (such as jeans, taxi, .. )

The Romanian alphabet is also based on the latin alphabet but it has 5 extra letters (ă, â, î, ș and ț). According to linguists these are really 5 extra letters, and not letters with accents.

Similarities and differences between Romanian and Italian grammar

Just like Latin, Romanian has 3 grammatical genders (masculine, feminine and neuter), in contrast Italian has only 2 (masculine and feminine).

Romanian has preserved certain features of Latin grammar, which have disappeared from Italian.

In contrast to Romanian, nouns in Italian do not inflect for case grammatical cases (ref)

Is Romanian or Italian easier to learn?

According to the US Foreign Service Institute (FSI), both Romanian and Italian are category I languages. This category contains the easiest languages for English speakers to learn.

Languages in this category take about 600-750 class hours before becoming comfortable with the language.

This means that Romanian and Italian both take about the same amount of time to learn.

PS: you can use our free web app, VocabChat to record your own vocabulary and phrase lists.