Are Korean and Chinese Similar Languages?

Hangul -the Korean alphabet in use today- was developed during the 15th century. Prior to that, the Korean language was mostly written using Chinese characters.

Linguistically, Korean and Chinese are not related languages. In other words, they are not derived from a common ancestor language. Basically, they belong to unrelated language families.

Despite coming from unrelated language families, hundreds of years of using Chinese characters to write Korean has led to the existence of some similarities between Korean and Chinese.

Similarities between the Korean and Chinese languages

At first glance, Korean and Chinese seem like languages which are very far apart.

Mandarin is a tonal language with four distinct tones. This means that differences in pronunciation tone, yield different words

Korean on the other hand has no tones and intonation changes depending on the speaker's mood, and the context of the conversation.

The Korean language has been influenced by the Chinese language through its use of Chinese characters for hundreds of years, before replacing them with its own writing system.

Interestingly, Korean is not the only language which was initially written with Chinese charaters. For centuries, the Vietnamese language was also written using Chinese characters, until its own alphabet was created.

Due to this period of using chinese characters, Korean adopted many words from Mandarin Chinese. A number of these loan-words are still in use today.

Here are some common words that are still currently used in Korean that came from Chinese.

As the Korean language grew and evolved with civilization, the need for new words often arose. This gave birth to a new whole subsection of Sino-Korean words created from Chinese characters.

Unlike the Chinese loanwords that were taken directly from Chinese and integrated into Korean, these words do not exist in Mandarin in any form.

The following are some examples of these Sino-inspired Korean words.

As a result of years of trade and Chinese influence, the Korean language has two different sets of vocabulary words for talking about numbers.

One set of numbers is native to the Korean language, the other one is derived from Chinese. These are called Sino-Korean numbers and are typically used for things like dates, time, money, addresses, and statistics.

Let’s first take a look at the differences between the two before we discuss how they are used.

The reason that Sino-Korean is used for time, money, and addresses is because historically official records were written by the government in Chinese hanja. Therefore, when it came to trade and diplomatic relations with China, using a shared and agreed-upon system of numbers made the most sense.

Native Korean on the other hand was historically used by the common people that had no need to learn the Chinese hanja system. Things that are counted in native Korean are people, age, hours, and day-to-day things in general.

If you are simply just counting from one to ten in Korean, native Koren is what you will use. While Sino-numbers in Korean are still in use verbally, the written hanja are rarely used as Arabic numbers (1,2,3,4…) have become the norm.

North versus South Korean and the Influence of Chinese

With so many loan words, it is an understatement to say that Chinese has not had a huge impact on the Korean language. However, with 48 million speakers of Korean in the South and 24 million speakers in the North, has that influence been distributed equally in both countries?

The political principle on which North Korea was founded is called “Juche” and refers to a system of self-reliance and autonomy, free from foreign influence.

While this has manifested as some of the most strict border policies in the world, naturally there have been linguistic developments reflecting Juche as well. A large aspect of the Juche ideology is the rejection of foreign products, ideas, and yes, even words.

As discussed earlier, a large portion of South Korea’s lexicon stems from Chinese loanwords. However, under Juche, this would not be acceptable as these are still foreign words in essence.

Below are some differences in vocabulary between South Korean and North Korean dialects on account of having the Chinese influence removed due to Juche ideology:

Why do the Korean and Chinese languages have such an interesting relationship? The best way to get an understanding of how these two languages interact with each other is to explore the history of both languages individually.

Mandarin Chinese is the second most widely spoken language in the world with over a billion native and nonnative speakers both in China and abroad.

Mandarin Chinese is often simply referred to just as “Chinese”. However, Mandarin is actually just one of the hundreds of languages and dialects spoken in China by the country’s many diverse ethnic groups.

The Chinese word for Mandarin is « 汉语 » (Hànyŭ). As the term indicates, it is the language of the Hàn Chinese ethnic group.

Due to its extensive use as the lingua franca of China, Mandarin is also referred to as « 普通话 » (pǔ tōng huà). This means "common language" as it serves as the natural standard for communication.

In the past, there was no official or predominant language in China up until the Ming Dynasty (1368–1644). Everything changed however when the capital moved to Nanjing where the ethnic majority was of Han descent.

During the Qing Dynasty(1644–1912) however, the capital was once again changed, this time to Beijing. Here, the traditional Han dialect merged with the Beijing dialect and served as the spoken language to be used by the ruling class.

Despite being widely spoken at the time, Mandarin didn’t become the official language of China until 1909. Today, Mandarin is not just spoken in China, but also in several of the nearby countries, such as Malaysia, Singapore, and Indonesia.

Where does the Korean language come from?

Unlike Chinese which has a fairly well-documented linguistic history, there is still a fair bit of academic debate about the exact origin of the Korean language.

For a while, many scholars believed it to be a branch of the Altaic branch of languages. This language family includes Turkish, Mongolian, and Japanese. However, evidence in recent years points in various directions, leaving experts to reach a number of theories that are still under discussion.

The Korean peninsula has been continuously inhabited by various ethnic groups since 10,000 BCE. Today however, Koreans are a distinct ethnic group in Northeast Asia, genetically and ethnically different from Chinese, Mongolian, or any other neighbors.

Ethnicities aside, Korea did not go uninfluenced by its neighbors and was an early adopter of Chinese characters during the Three Kingdoms Period.

In Korean, Chinese characters are called « 한자 » (Hanja). The name comes from the Chinese term « 漢字 » (Hànyŭ) emphasizing that this was the language that came from the Han Chinese people.

Hanja was the predominant written script used in Korea up until the 15th century as it allowed Korea to communicate with its neighbors, namely China and Japan. At the time, Korea was a tribute state of China and so this shared script was to Korea’s advantage.

This meant that although Korea’s domestic affairs were governed internally, they still had to pay taxes to the Chinese Empire. Additionally, China had the final say when it came to things such as trade and war.

While the hanja system was good for facilitating communications between other states, the system proved challenging as many problems arose.

For instance, only the elite class could learn Hanja as thousands of characters took years to study, and hiring a tutor cost a great deal of money. This left the majority of the country illiterate and made governing a unified state quite difficult.

Another challenge was that written Hanja could not quite capture the verbal essence and sounds of spoken Korean. This is because the grammatical structure of Chinese and Korean differed substantially.

This urged King Sejong of the Yi Dynasty to create a new writing system in 1443. This feat is one of the many reasons that King Sejong is revered as perhaps the greatest king of Korea and is still highly venerated to this day.

This writing system was called Hangul (한글). «Han» refers to the Han people of Korea and «Gul» means “script”. Note however that although they sound similar, the « 汉 » (Hàn) people of China are different than the « 韩 » (Hán) people of Korea.

Hangul is often referred to as the most easy-to-learn written script in the world as it is made up of 24 basic letters: 14 consonants and 10 vowel letters. These letters are combined in a number of ways to create syllable blocks and are very simple to write.

For example, ㅎrepresents the “h” sound, ㅏis the vowel “a”, and ㄴdenotes an “n”. When you arrange them together in a block, you get 한 which is read as “han”. Pair that with ㄱ(g),ㅜ(u), ㄹ(l) which makes 글 (gul), you get 한글 or Hangul. 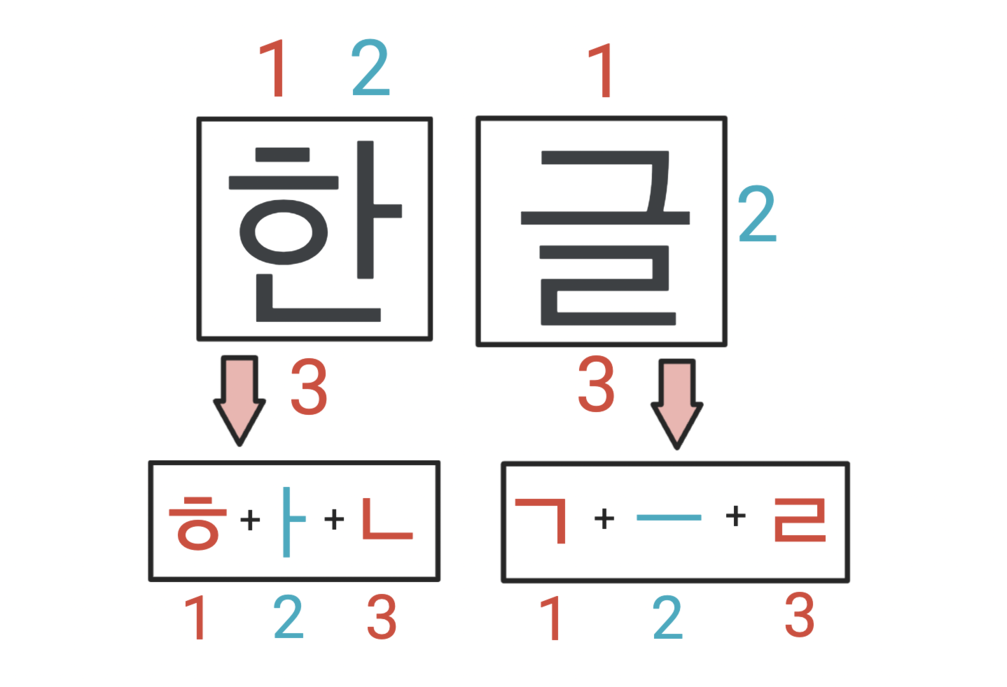 Which Should I Learn First, Chinese or Korean?

Korean and Chinese are among the most challenging languages to learn. They are also highly sought-after languages and by learning one or both, countless doors in business, education, and travel can be opened.

For those of you who are aspiring polyglots or have interests in both languages, does studying one help you learn the other? Let’s look at some of the obstacles and challenges of learning each language so that you can decide on your own.

Note however that this information is made to be taken in from the perspective of English speakers. Therefore if you already speak a language such as Japanese or Mongolian, your experience and opinion could be widely different

Grammatically, Mandarin Chinese is more similar to English than English is to Korean. This makes studying grammar and taking in new information relatively easier in Chinese rather than in Korean.

Mandarin follows the SVO (Subject-Verb-Object-) grammar structure just like English so a sentence such as:

Korean sentence structure follows a SVO (Subject-Object-Verb) pattern which makes it a bit more difficult and counter-intuitive for native English speakers to learn. The same sentence in Korean would read:

As you can see, the verb “to drink” comes at the end of the sentence. This tends to lead to a lot of mental gymnastics when it comes to getting to the point of naturally speaking and even thinking in Korean compared to Chinese.

One benefit of learning Korean first for English speakers however is the sheer amount of loanwords that have migrated over to Korean from English. Vocabulary words such as:

All come from English as well as countless others. Chances are if you forget or don’t know a word in Korean, you can often just “Koreanify” your pronunciation of the English word to get your meaning across.

Chinese on the other hand however uses relatively few English loanwords and so if you don’t know a vocabulary word, you might be backed into a corner.

Learning Chinese first on the other hand is beneficial to learning Korean for the same reason. Since so many loanwords come from Chinese as well, you can apply the same methods to get your meaning understood in Korean.

No matter which language you learn, there is never a bad reason to learn a language. And while it may not be easy, studying Korean and Chinese is the first step down an incredible journey that will lead you to places far and beyond.

If learning about East-Asian languages is something which interests you, you might also be like to learn about the differences and similarities between Chinese and Japanese as well as those between Korean and Japanese.