Is Catalan more Similar to French or Spanish?

“Je mange une pomme le matin” - “Jo menjo una poma al matí”. When put together, these two simple sentences (which translate as “I eat an apple by the morning”) highlight how patently close French and Catalan are.

By contrast, “Yo me como una manzana por la mañana”, as we would say in Spanish, sounds way more dissimilar. Still, most Catalan speakers would probably maintain that their language is closer to Spanish rather than French. How is this possible? 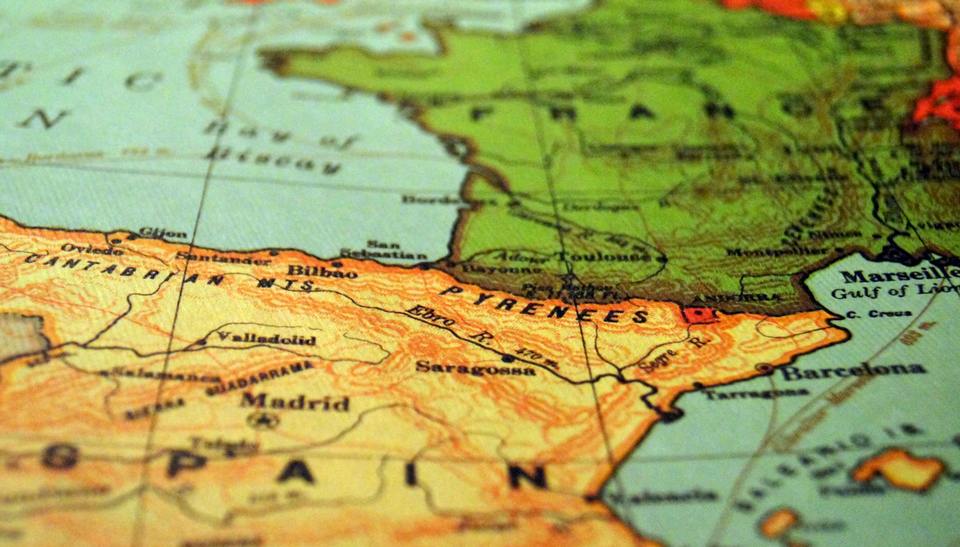 Well, let’s delve into the fascinating worlds of language, grammar, and history to find it out!

First things first: is Catalan considered a language or a dialect?

The Catalan language comes from the Vulgar Latin dialects as they were spoken in Hispania Tarraconensis, a Roman province encompassing much of north and the north-east of Spain.

Catalan can be considered a close relative of both French and Spanish. However, after several centuries, Catalan has evolved well enough to develop its own structure and grammatical norms, and it operates independently from the evolution and current state of Spanish, French, and other Romance languages.

Therefore, Catalan is officially not considered a dialect, but an autonomous language with several dialects of its own (Valencian, Central, Balearic, etc.).

Some aspects shared by both languages might be obvious even for non-speakers. Here are several examples of this:

In terms of how vowels are pronounced, Spanish is one of the simplest languages in the world. This is not the case of French, where vowels can produce a variety of sounds depending on several factors, such as their placement within the word or the use of accents and/or diphthongs.

Catalan speakers can feel related to French in this sense, as they naturally understand that an “e”, for example, is not necessarily just an “e”. The pronunciation of that specific vowel changes noticeably in words such as: «cec» (blind), «pes» (weight), and «mare» (mother) – in this last case, sounding much more similarly to a Spanish “a”.

In French, we find acute accents (as is the case of regardé and école) and grave accents (such as frère and voilà).

This has a marked affect on the pronunciation of the word, and it should be mentioned that Catalan and French follow very similar rules: the vowel “a” can only have a grave accent, while “e” can carry either a grave or an acute accent depending on the word.

On the other hand, instead of acute/grave, Catalans denominate them open and closed accents.

The cedilla, or “c trencada” (broken c) as it is called in Catalan, is an identifying mark of some Romance languages like French and Portuguese. It should be read with a soft /s/ sound before “a”, “o”, “u”, or at the end of a word.

Little known fact: the cedilla comes from old Spanish, where it was originally used as the bottom half of a miniature ‘z’ in italics.

The use of elisions (“l’article”, “l’Anglaterra”).

Whereas Spanish articles have no variations regardless on which words follow them (beyond number and gender), Catalan and French use elisions under certain rules.

Unlike the English language, where elisions such as “I’m” or “can’t” are optional and indicate informality, French and Catalan require their usage regardless of the spoken register.

In a nutshell: in Catalan, you wouldn’t say “el home” or “el estranger” (the man/the stranger), but “l’home” and “l’estranger”.

Some Catalan nouns and verbs have a much clearer resemblance to French than Spanish, reflecting the cultural proximity and influence stemming from the French territory.

Check out the examples shown in the following table and notice how far Spanish is in terms of resemblance:

Curiously enough, this table also shows the influence that French has exerted on English. Just look at the last two examples! (Blue and Mirage).

Similarities between Catalan and Spanish

All right! So far, we have done an excellent job at explaining how close French and Catalan are. You might be thinking that we have already answered to the question that forms the title of this article, but this is far from the truth.

One might argue that Catalan and French share more specific grammatical marks and traits, just as we have explained in the previous chapter. However, in terms of general vocabulary and overall readability, it is fair to say that Spanish speakers would immediately recognize more words than what French speakers would.

Take a look at these verses written by Anna Maria Muñoz:

Have you read this poem in Spanish or in Catalan? The reality is… you could have read it in either! Pronunciation aside, these four verses can be equally read in both languages without changing a single letter.

This level of similitude can hardly be found between French and Catalan, no matter how deep you investigate both languages.

In case you were wondering about the meaning of these double-edged words (idiomatically speaking), here’s a translation:

A star shines over the quiet sea.
A bilingual poet meditates: “I shall create an ode, a ballad.
The soprano, enormous, sings insatiably, irresistibly.
The poet cannot stand it… fury regrows, looking for a path to follow.


Also, here is another table just like the one in the previous chapter, only this time we will use it to prove the opposite:

As you can see, we can find many Catalan words that not only are closer to Spanish but are spelled the same, or with almost no variation.

So, where does Catalan come from?

We are past halfway this article and still we haven’t been able to answer the big question: is Catalan more similar to French or Spanish? How about we examine the origins and evolution of the Catalan language and see if that helps to reach a satisfactory conclusion?

You might have heard of the Pyrenees. These mountains act as a sort of natural border between southern-east France northern-east Spain, where Catalonia is located.

By the 9th Century, Catalan had developed in both sides of the mountain range. It is worth mentioning that, by the beginning of that century, the County of Barcelona was still a part of the Frankish-dominated Carolingian Empire, so it should not come as a surprise that the language was heavily influenced by French.

In further centuries, Catalan expanded southward, reaching the modern territories of Valencia and the Balearic Islands. By the end of the 15th century, it had become a well-known presence in the Mediterranean world. Successful chivalry novels such as «Tirant Lo Blanc» were written and printed in Catalan, which contributed to the popularization of the language.

The language would endure harsh times after this. The increasing use of Spanish in Castille, the prohibitions of the French Revolution in the 18th century, and repressions by Franco’s dictatorship during the 20th marked a noticeable decline for Catalan.

Still, Catalan had time to experience its own literary Renaissance during the 19th century, and was recognized and institutionalized for good when Spain finally transitioned to democracy.

A quick summary of its chronicle would be the following: Catalan was probably more influenced by French during its first stages, but has been much more in contact with Spanish in recent centuries.

By this stage, it should be safe to say that Catalan is at some kind of mid-point between Spanish and French influences. Let’s put together some sentences and expressions that may help us to tip the scale in either direction:

Here we can observe the Catalan use of elisions (M’agrada/I like), as well as the tendency to use double consonants (passar/to spend). Also, words like “amics” and “Nadal” are arguably closer to their French equivalents (“amies” and “Nöel”) than to their Spanish ones (“amigos” and “Navidad”).

Interestingly, many Catalan verbs are immediately recognizable for French speakers (parlar/parler). Notice, however, that the word “difícil” (difficult) is spelled exactly the same way in Catalan and in Spanish, including the accent over the “i”. In this aspect, the French word “difficile” is just one step away in this virtual battle of equivalences.

“Aujourd’hui” is the French word for “today”, and it sounds closer to Catalan (“avui”) than to the Spanish word “hoy”. Nevertheless, the past tense construction (“ha sigut”) follows the same grammatical trail that Spanish would (“ha sido”), as opposed to the French “a été”.

Any Spanish speaker would immediately understand this sentence upon reading. When translating this sentence to Spanish, we barely find any differences (“Dos personas caminan por la calle de camino al trabajo”). Things would get a bit fuzzier for French speakers, as they would probably say something like “Deux personnes marchent dans la rue pour se rendre au travail”.

Conclusion: Is Catalan more similar to French or Spanish?

Whether Catalan is more similar to French or to Spanish is actually an ongoing, somewhat controversial debate in Spain.

There is a group of dialects spoken in southern France called ‘Occitan’. This might be the closest language to Catalan, though some Portuguese and Italian speakers also claim to understand Catalan with a certain ease, and feel a familiarity with it in terms of linguistic roots.

Concerning vocabulary, Catalan shares more similar words with Spanish. Regarding phonetics and grammar traits, it might be more connected to French.

In layman’s terms, you might say that if French and Spanish had a baby, that baby would be Catalan. However, Catalan is a complicated mixture with enough features of its own to constitute its own language. The baby has grown up and left the parent’s house for good!

One thing we can say for certain: if you speak any Romance language, it will be easier for you to understand and learn Catalan. Even though it is rather small in terms of millions of speakers, it is a beautiful language with some unique expressions and words.

We hope that this article has satisfied your curiosity and answered some of your doubts. For more on Catalan check out this article on writing letters and emails in Catalan.

PS: you can use our free language tool, VocabChat to create and record your own vocabulary and phrase lists.