Icelandic and Norwegian: The Similarities and the Differences

Icelandic and Norwegian are both languages which have evolved from Old Norse which was the language spoken by the Vikings.

Iceland was first settled in 874 by Ingólfur Arnarson, a Norseman who came from a city which is today part of Norway.

Because of its secluded location, as an Island nearly 1000 km from Norway, Iceland has been relatively sheltered from foreign linguistic influences. Compared to Norwegian, the Icelandic language has remained much closer to Old Norse.

Icelandic and Norwegian have had over 1000 years to diverge in different directions from their common linguistic ancestor. This raises the question as to how similar contemporary Icelandic is to contemporary Norwegian.

There are a lot of similar vocabulary words between Icelandic and Norwegian. These shared words are often spelled slightly differently.

Below are some examples of similar words. Notice that when an Icelandic word ends in ‘ur’, the corresponding Norwegian word often has that ending removed.

Pairs of words which appear to be similar yet have completely different meanings are called “false friends” in the context of language learning.

Most of the vocabulary words which appear to be similar between Icelandic and Norwegian do in fact have the same meanings. However here is an example of an Icelandic-Norwegian vocabulary “false friend”:

Icelandic and Norwegian: a common origin

While it might be easier for Icelanders to speak a bit of Norwegian than it is for them to take on Danish or Swedish - modern Norwegian and Icelandic are still quite different from one another.

What happened? How did the two languages diverge?

At the time of Iceland’s settlement, Norway and Iceland were closely connected because the Viking settlers in Iceland came primarily from Norway, back when Vikings ran the world. Well, they ran the North Atlantic, at least...

The history of this connection is detailed by Icelandic historian, poet, and politician Snorri Sturluson, in the Snorra Edda, also called the Prose Edda, written in the early 13th century, which details much of Iceland’s settlement history.

Early on, Norwegians and Icelanders both spoke Old Norse. Their languages didn’t start to diverge until around the 14th century.

In contrast Iceland, being remote and isolated, was preserved from these influences. Icelandic grammar hasn’t changed much in the past seven hundred years or so.

In fact, the language spoken in Iceland today is almost identical to the Old Norse spoken by the Viking settlers hundreds of years ago.

Icelanders of today find it pretty easy to read Old Norse texts, while modern-day Norwegians would probably have a very hard time with it.

There are also many different dialects within Norway (population: 5.379 million) depending on the location of the speaker in the country.

Iceland (population approximately 366,000), on the other hand, has only one form of the written language, and a tiny variation in the dialect between the general population and the Icelanders who reside in the northern part of the island.

Icelandic and Norwegian used similar alphabets, but each of these languages has a few letters which the other language does not have. 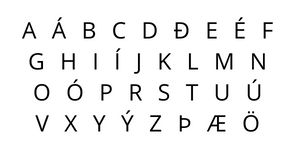 The letters Ð and Þ are unique to Icelandic, and derive from Old Norse. Icelandic also includes many accented forms of vowels, e.g., Á, É, Í, and so on.

Norwegian uses the letters Ø and Å, which are present in the other Scandinavian languages, but not in Icelandic.

In both languages, the letters C, Q, W, X, and Z are used only/primarily in foreign loan words.

Articles in Icelandic vs Norwegian

Indefinite articles exist in Norwegian, but they do not exist in Icelandic.

In Icelandic and in Norwegian, the definite article is usually added to the end of the word (it is a suffix).

The Norwegian language was influenced by German during the period of the Hanseatic League, which was an organization of merchants during the middle ages.

Hanseatic League was a commercial organization based in the North German cities of Hamburg, Lübeck, and Bremen. The Hanseatic League had trading stations in several northern European cities, including the Norwegian city of Bergen.

Here are some examples of Norwegian words which come from German. The corresponding Icelandic words generally come from Old Norse and not German.

Icelandic and Norwegian are different in the way they deal with foreign words.

Icelanders go to great lengths to preserve their language. Rather than adopt foreign (mostly English) words with Icelandic spelling, the Icelandic language committee develops entirely new words based on the linguistic conventions of Icelandic.

Many of these words are tech-related — email (tölvupóstur), hashtag (myllumerki), podcast (hlaðvarp). Icelandic “refuses” to simply adopt them directly from English.

Norwegian is more open to directly incorporating foreign words as loanwords. And, every now and then, a loanword slips into Icelandic.

Grammatical cases have been preserved in Islandic but not in Norwegian

Icelandic has preserved many of the complicated grammatical features from Old Norse, while these have mostly disappeared from Norwegian.

The example phrases below show how nouns in Icelandic are inflected based on grammatical cases. Notice how in the Norwegian phrases the noun is not inflected.

Norwegian verbs are simpler to conjugate than Icelandic verbs

In Norwegian, the same verb form is used for all pronouns, this is not the case in Icelandic.

For example, here are some conjugation tables for the verb “to read” in Norwegian and Icelandic. Notice how much simpler the Norwegian conjugation is, compared to Icelandic.

Choosing between learning Norwegian and Icelandic

For English speakers, Icelandic is a much more difficult language to learn than Norwegian.

The choice between learning Icelandic and Norwegian also depends on the learner's affinity for grammar. Language learners who enjoy grammatical concepts will enjoy learning Icelandic; those who dislike grammar may have a more pleasant time learning Norwegian.

In any case, due to the similarities in vocabulary, learning either Icelandic or Norwegian would make learning the other one easier later on.

Still Icelandic and Norwegian have many similar vocabulary words in common. It is mostly in terms of grammar that these two languages differ the most.

Icelandic has kept many of the complicated grammatical features which existed in old Norse, while many of these features have disappeared from Norwegian.

By Oskar Stefansson
Oskar is a native Icelandic speaker
Share