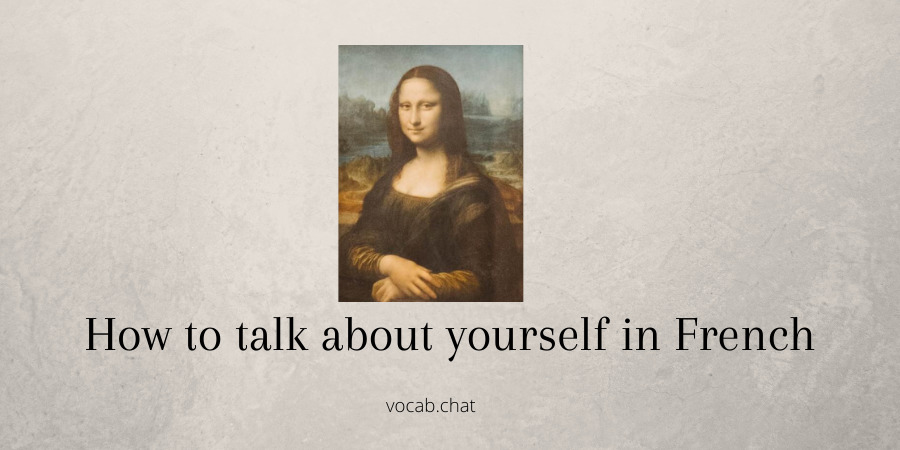 How to Talk About Yourself in French

Learning how to properly talk about yourself in another language is key to making the best first impression possible when meeting new people. There are a variety of ways to introduce yourself and your personality in each culture, with its particular customs and formulations. In this article, we will go through the key phrases to know to best talk about yourself in French.

Introducing yourself in French

“Bonjour, je m’appelle __.”
- “Hello, my name is ____.” This is the same formulation regardless of the gender of the speaker. Of course, you can also switch up the salutation itself to better fit the context, such as using “Salut” for a casual one, or “Bonsoir” if it in the evening.

“Je m’appelle ____, et je viens des Etats-Unis.”
- “My name is ___, and I come from the United States.” Of course, you would replace ‘Etats-Unis’ with any place you are coming from, such as ‘Bresil’ for Brazil, ‘Le Royaume-Unis’ for the United Kingdom, and so forth.

“Je m’appelle ___, j’ai vingt-quatre ans et je viens du Royaume-Unis.”
- “My name is ___, I am twenty-four and I come from the United Kingdom.” This phrase, when substituted with the correct name, age, and nationality which applies to you, covers all the basic information needed when meeting someone for the first time.

“J’ai vingt-neuf ans, et je vais bientôt avoir trente ans.”
- “I will soon be thirty.” In French, when saying how old you are, you use the verb “avoir” (to have), meaning it literally translates to “I have twenty-nine years.” If you are close to twenty, thirty, or forty years old, it may be more natural to say you are nearing that decade.

“Je suis Américaine, mais je vis au Canada.”
- “I am American, but I live in Canada.” If you have been living in another country than your natal one for a long time, you may feel that it is a significant part of your identity. By telling someone where you live in addition to where you are from, they may get a better sense of who you are and where you are coming from.

Talking About Your Profession and Studies in French

Work and studies are an important part of most people’s lives. Knowing how to describe where you work or study, and what in what field, can give a person important insight into who you are and what you do in life. Below, we will show you some basic examples of how to introduce your profession or field of study in French.

“Je suis étudiante en médecine dans une université Américaine.”
- “I am a medical student in an American university.” If you want to say what year of study you are in, you can add “Je suis en troisième année” (I am in third year), “Je suis en masters” (I am doing my masters), and so forth.

“J’ai fini mes études pour devenir vétérinaire, et pour le moment je fais un stage en Californie.”
- “I finished my degree to become a veterinarian, and at the moment I am doing an internship in California.” As with the others, you can always replace ‘vétérinaire’ with other professions such as ‘banquier’ (banker), ‘ambassadeur’ (ambassador), ‘danseuse’ (dancer), and so forth.

“Je suis institutrice dans une école primaire.”
- “I am a teacher in a primary school.” In French, “école primaire” refers to school from ages six to around ten. Kindergarten is “la maternelle,” middle school is “le college,” and highschool is “le lycée.”

“Je vais commencer des études en business à l'automne."
- “I will begin business studies in the Fall.” You would use this phrase if you are a soon-to-be university student. In French, the word “business” is borrowed from the English, but pronounced with a French accent. You may not be understood if you use an American or British accent when pronouncing the word.

“Je viens de finir mes études, et je vais commencer un stage à New York.”
- “I have just finished my studies, and I am going to start an internship in New York.” In France, internships are often required for students, and much more common than in North America. Students will sometimes do two or three internships over the course of their degree, and may have the choice to go abroad for them.

“Je travaille dans le secteur de la culture.”
- “I work in the cultural sector.” In French, it is common to refer to the field you work in by its sector, especially if the profession you are doing covers a wide variety of tasks. It also puts emphasis on the environment and subject of your profession rather than on your job itself.

Talking About Your Interests in French

Interests are an important part of anyone’s personality, and knowing how to describe your interests, passions, and hobbies, is crucial when learning a new language. Knowing these basic formulations will help you deepen conversations in French. They will also be useful when making French friends.

“Je suis passionné par le sport.”
- “I am passionate about sports.” This is the basic French formulation to say you are passionate about something, and you can always swap out “le sport” for something such as “les voitures” (cars), “l’histoire” (history), “les langues” (languages), for example.

“J’adore apprendre de nouvelles langues.”
- “I love to learn new languages.” For a less intense version, you can also say “J’aime…” instead of “J’adore,” which translates to “I like.” However, “J’adore” is less intense than the English “I love,” meaning that you can use “J’adore” without sounding extreme.

“Je suis une fan des documentaires sur la nature.”
- “I am a fan of documentaries on nature.” This is the feminine version of the phrase, and in the masculine form, you would use “un fan.” This phrase is more casual, and would refer to a general interest or hobby of yours rather than something you are very passionate about. You would also use this in casual, rather than formal, settings.

“La politique ne m'intéresse pas, je préfère la littérature."
- “Politics do not interest me, I prefer literature.” Although we generally speak more about our positive interests, it is good to know how to talk about what you do not like. In this case, by talking about the lack of interest in politics, even more emphasis is placed on literature.

“J’aime la cuisine, les livres, et les randonnées."
- “I like cooking, books, and hiking.” This is a simple and effective way to cover some of your most important interests. After learning more French vocabulary, you will be able to easily substitute any of these terms to fit your personality and the context you are in.

Talking About Your Personality in French

As much as interests, work, and studies are key features of a person, certain personality traits are fundamental to each person, and make us unique as individuals. Knowing phrases on how to talk about certain parts of your personality can help deepen another person’s understanding of who you truly are.

“Je suis une personne plutôt timide.”
- “I am a rather shy person.” No matter the gender of the speaker, when you use the French noun « une personne » to refer to yourself, it is always feminine. (see this article for more on determining the gender of French nouns). If you are a shy person, letting the person that you are speaking with know can help them understand how you are around people better.

“Je suis une personne très extravertie.”
- “I am a very extraverted person.” If you are traveling alone in a French-speaking country, for example, and tell someone you have just met that you are extraverted, they may be more inclined to have you meet their friends.

“On me dit souvent que je suis une personne drôle."
- “I am often told that I am a funny person.” Be careful not to switch up the wording by saying “une drôle de personne,” which would translate closely to “a weird person.” Although used less commonly, this phrasing can be used to switch up from the usual “Je suis…” formulation.

“Je n’ai pas beaucoup de confiance en moi.”
- “I do not have much confidence in myself.” A lot of people struggle with insecurity and lack of confidence, and confiding it in someone can help make the relationship stronger. We all have more or less positive personality traits, and knowing how to communicate them all is a good skill to have.

“Je suis très sensible et j’aime beaucoup aider les autres.”
- “I am very sensitive and like to help others.” The French word « sensible » is used more regularly than its English equivalent « sensitive » is used in English, and has less negative connotations. By saying you are sensitive in French, you are saying that you are sympathetic and probably feel a lot of emotions.

“J’ai tendance à être attiré par les gens calmes.”
- “I have a tendency to be attracted to calm people.” The kind of person are attracted to, whether romantic or otherwise, can say a lot about the kind person you are. If you are more on the eccentric side of the spectrum, you may find yourself closer to people who are calm, to create a balance.

Knowing how to talk about personality in French can be useful when you write an informal French letter to a pen pal or friend, or if you ever decide to write a love letter in French.

Talking About Your Physical Features in French

Physical features are also an important part of what makes individuals unique. Although they may not be as important to what makes up a person, there will always exist situations in which you will need to know how to describe your most basic features. These phrases will help you learn to talk about your physical features in French.

“Je suis grand, mince, et j’ai les yeux bruns.”
- “I am tall, skinny, and have brown eyes.” You could also say “marron,” which also means brown. That said, while the word “marron” can be used to describe eye color, it is not used in French to describe hair color.

“J’ai une longue barbe avec la tête rasée."
- “I have a long beard and a shaved head.” This style is growing in popularity, so knowing how to say this can help not only to describe yourself, but also help you achieve this specific look if you are looking to change up your style.

“Je suis petite avec les cheveux frisés."
- “I am short with curly hair.” In French, the word “petite” (“small”) refers specifically to height, while in English it tends to be used when refering to someone short and skinny. In French, a “petite” person does not necessarily mean they have a small waist.

“J’ai une carrure athlétique avec des tatouages sur mes bras.”
- “I have an athletic build with tattoos on my arms.” As with the English term “build,” the French word “carrure” refers to someone’s overall body type. It is used more often to refer to an athletic build than anything else.

These phrases are only a starting point into your journey to learn how to talk about yourself in French. But as you acquire more extensive and complex vocabulary, you will be able to better formulate these phrases according to your personal features, whether they are physical, mental, or in terms of lifestyle.

PS: You can use our free language tool to record your own French phrases.