Hindi, which is the most spoken language in India, is a descendant of the Sanskrit language.

There are many Hindi vocabulary words which originate from Sanskrit. The table below contains some examples of such words:

Sanskrit is a much older language than Hindi

Sanskrit is a much older language than Hindi. Sanskrit has been around for over 3 thousand years (the oldest known Sanskrit text, the Rigveda was written between some time between 1500 and 1000 BCE). In contrast, Hindi is a more recent language which is less than one thousand years old.

Because Sanskrit has been used for such a long period, there are differences between the earlier form of Sanskrit (called Vedic Sanskrit) and the later form (called Classical Sanskrit).

The Devanagari script is used for writing both Sanskrit and Hindi

A variety of writing systems have been used for the Sanskrit language, depending on the time in history and the location. Today it is common for Sanskrit texts to be written in the Devanagari script, which is also used to write in Hindi. 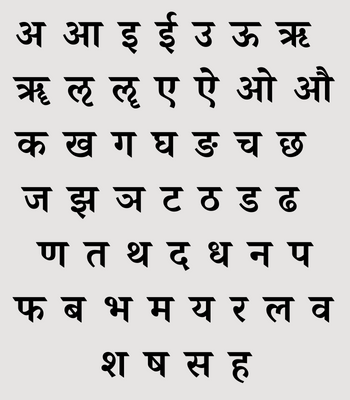 The Devanagari script is an alphasyllabary (which is what some linguists call an “abugida”). A syllabary is a set of symbols where each one represents a syllable.

In the Devanagari script, the consonant symbols have an inherent vowel. For example the symbol “त” corresponds to the syllable “ta”. The vowel ‘a’ is the default in this writing system, and naturally it is a very common vowel in Sanskrit and Hindi.

To suppress the inherent vowel, an additional marker is used (which is called a Virama). For example “त्” corresponds to the pure consonant “t”.

Sanskrit, when written in the Devanagari script, is a highly phonetic language (words are pronounced the way they are spelled). In contrast, Hindi is not as phonetic a language as Sanskrit.

What makes Hindi less phonetic than Sanskrit is a phenomenon in spoken Hindi which linguists call “schwa deletion”. What this means is that in some Hindi words, one of the default vowels is not pronounced even though a Virama marker is not used to indicate its absence.

For example the word “वन” means “forest” in both Sanskrit and in Hindi. In Sanskrit, this word is pronounced the way it is spelled: “vana”. But in Hindi it is pronounced “van”.

Each Sanskrit noun has one of 3 possible grammatical genders (masculine, feminine and neuter). For example:

In contrast, Hindi nouns have one of two possible grammatical genders (masculine and feminine)