How to Write a Letter or Email in Greek: the complete guide

This guide will teach you how to write an email or a letter in Greek. It will explain the relevant cultural norms and provide plenty of examples of Greek phrases which you can use.

Greeks are spontaneous, generous, sociable, and have a high regard for direct and somewhat laconic communication. We, Greeks, love seeing letters dropping through our letterbox, as long as they are not utility bills!

How do you start an email or a letter in Greek?

Writing emails or letters in Greek requires adopting an appropriate degree of formality and manner of address. This depends on the recipient’s status and the relationship between the writer and the recipient.

Style and etiquette are primary considerations in many societies, including the Greek society. We'll cover the proper way of greeting the recipient for various levels of formality.

The following way of address is the norm for all formal correspondence in Greek, (both letters and emails) provided that you know the recipient’s surname, and that they are not a person whose social position calls for a special form of greeting:

The adjective “Aξιότιμε/Αξιότιμη” is used to address any person of high social standing aside from the clergy, and the President of the Hellenic Republic.

Be mindful of Greek grammatical suffixes:

The Greek sociolinguistic convention of “second person plural”: A must for not making a faux pas.

In Greek, the second person plural is a must when addressing practically any individual who is not a friend, relative or colleague of yours.

Failure to follow this courteous manner of address is considered a faux pas when made by a non-Greek speaker, but offensive if made by a Greek.

The only exception to this cultural norm is communication between young people. All conventions vanish into thin air then, as Greek youth consider people of their age their peers, whether they know them personally or not.

So always bear in mind that the second person plural is the sine qua non of polite communication – both verbal and written - in Greek culture.

Aspects of the Greek language you must be aware of

Let me draw your attention to some characteristics of this beautiful language to facilitate your writing.

Greek verbs tend to change according to the subject of the sentence, the number, the tense, the mood, the voice, and the conjugation group they belong to. Nouns, pronouns, adjectives and participles also get various suffixes to denote differences in gender, number and case.

A relaxed, friendly style is used between friends, family members, colleagues and young people in Greece.

An informal style is also adopted between peers of the elite who are also friends. However, when writing in an official capacity they, too, have to abide by established formal protocols.

The customary way to start an informal letter or email in Greek is to use «Aγαπητέ / Αγαπητή», followed by the recipient’s first name.

Here are a few examples:

For an even more casual style, go for one of the following:

Salutations such as “Kαλημέρα Στέλλα,” (“Good morning Stella”), are also used to start an email to a friend or relative. Such salutations in the second person plural have also become more frequent in formal, transactional emails.

So, it’s perfectly okay to start a formal email to a company with “Kαλημέρα σας,” (lit. Good morning to you), or “Kαλησπέρα σας,” (lit. Good afternoon to you). The term “σας” here refers to the recipient in the second person plural, in line with Greek etiquette.

How to end an email or letter in Greek

To end a formal Greek email or letter, the following sign-offs can be used:

After the complimentary close of a formal letter, sign it, and then type your first name and surname; if it is an email, just type your full name.

In all your formal letters and emails, your position and communication details should follow right after your name and surname; unless you are writing a letter on a letterhead.

Depending on the degree of intimacy, you can end a casual letter or email in numerous different ways.

Here are some common ways to end an informal Greek letter or email:

Here are ways to end an informal Greek letter or email which is addressed to family members:

The term “Σας” denotes that more than one person is addressed. To address only one person, use “Σε” instead. So if you are writing to an old relative you hold dear, the right complimentary close is «Σε φιλώ με αγάπη».

How to state the purpose of a formal letter/email, in Greek:

As you can see, the subject line is followed by the reference line if needed.

Stating the purpose of the message

Here are some useful Greek phrases for referring to the purpose of the communication in the opening paragraph of a formal letter or email:

How to address your letter/email to a specific person at a public institution, company etc.

To be more precise, start your email at the top left corner with the word “ΠΡΟΣ:” (TO:) followed by the name of the company or organisation you are writing to and its address. Continue with the date (on the right). Then quote the attention line.

Letter: Write “ΠΡΟΣ:” (TO:) followed by the name of the company or organisation and its address at the top left corner. Continue with the date (on the right). Then quote the attention line and the subject line, like this:

Useful phrases for the final paragraph:

Informing the recipient about attachments.

Here are some greek phrases for referring to documents attached to an email/letter:

Refer to the attachments within the main body of your letter or email and provide a numerical list of them, as well as their total number, after your sign off.

Here is an example:

How to write a postcard in Greek

Just address the recipient by his/her first name and write a very short message. For example:

How to write a birthday card in Greek 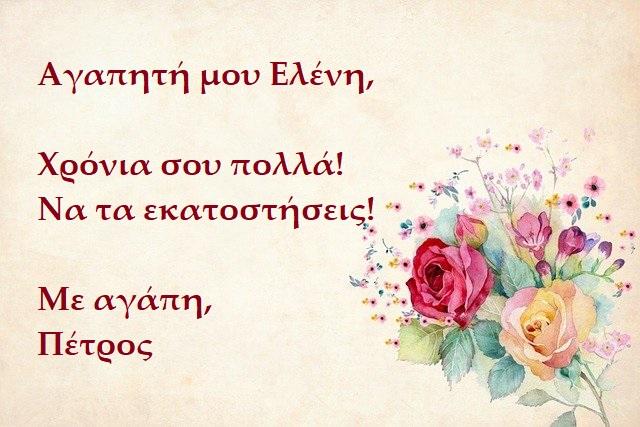 Use “Aγαπημένη μου”, or “Aγαπημένε μου” (My beloved) plus the recipient’s first name for a more affectionate or intimate tone.

There are countless creative ways to express your birthday wishes to a friend or relative. The most customary ones are these:

For a more affectionate tone, add the word “you” after “Aγαπητή” or “Aγαπητέ”, as in the card shown above. “Aγαπητή μου” and “Aγαπητέ μου” mean “My dear”.

How to write a thank you card in Greek

How you write a thank you card in Greek depends on whether it is an informal or a formal one:

What to write in a Greek wedding card

Here are some greek phrases which can be used when writing a wedding card in Greek:

Aγαπημένη μου Γεωργία, Σε ευχαριστώ πολύ για το υπέροχο δώρο! Ήταν η πιό όμορφη έκπληξη στα γενέθλιά μου. Τι λέτε να έρθετε οικογενειακώς να περάσουμε το Πάσχα μαζί; Mας έχετε λείψει πολύ. Χαιρετίσματα και πολλά φιλιά στον Γιάννη και στα ανηψάκια μου από όλους μας. Με αγάπη, Αντωνία Translation: My beloved Georgia, Thank you very much for the wonderful gift! Ιt was the nicest surprise on my birthday. What about coming here with your family to celebrate Easter with us? We have missed you all so much! Regards and lots of kisses to Gianni and to my little nephews and nieces from all of us. With love, Antonia Conclusion

Honesty, brevity and courtesy never go out of style. When it comes to correspondence, these values determine the response your letter or your e-mail will get, to a large extent; so stick to them whichever language you are using!

By Eirini Voulgari
Eirini is a native Greek speaker
Share