French phrases to know when dining in a French restaurant

You don't need to reach complete fluency in French before you start seeing the benefits. In fact, learning a few French phrases can be enough to order in French when you are at a restaurant in France.

Even if you haven't reached a native level of French, the French restaurant staff will appreciate your efforts.

In this guide we'll learn some French phrases for ordering food in a restaurant, as well as information about French restaurant etiquette.

French phrases for ordering food at a restaurant

Good French bistros are often very busy. Waiters may not always have the time to figure out what you want if you are speaking in English. Here are some useful French phrases to know for the process to be most efficient.

“Pourrions-nous voir la carte ?”
-  If you are at a bistro for lunch or in the early evening, it may not be obvious if you are looking to have a meal or just a drink. This sentence means: “Could we see the menu?”

“Bonsoir, que voudriez-vous boire ?”
-  This translates to “Good evening, what would you like to drink?” You can expect this to be the first question a French waiter will ask you.

“Que voudriez-vous commander à manger ?”
-  This is what a waiter would ask you to know if you are ready to order your meal. “Commander” means to order, and “à manger” is the verb “to eat.”

“Nous sommes prêts à commander.”
-  “We are ready to order.” If you were dining alone, you would say: “Je suis prêt à commander.”

“Quelles sont les spécialités de la maison ? "
-  “What are the specialties of the restaurant?”

“J’aimerais ___, avec ___.”
-  This is the proper formulation when ordering something specific. “J’aimerais” is “I would like,” and “avec” means “with.”
“J’aimerais le veau avec les pommes de terre sautées " translates to “I would like the veal with pan-roasted potatoes.”
You may also use the conditional tense, such as “Je prendrais…,” which translates to “I would have…” Both these formulations are equally respectable to use in a restaurant.

“Est-ce que nous pourrions avoir une carafe d’eau ?”
-  This is what you would ask if you wanted to have a glass container for water at your table. In France, people often will get a “carafe,” rather than having waiters come by to serve water in individual glasses.

“Où se trouvent les toilettes ?”
-  This translates to, “Where is the bathroom?”

“Avez-vous des plats sans viande ? "
-  This translates to, “Do you have any dishes without meat?”
-  If you are vegetarian, you may struggle to find a traditional French restaurant that has a wide array of meat-free options. That said, vegetarianism is popularizing across the world, and if you are unable to understand the menu or would like to know if there is anything you can eat, you can ask using this phrase.

“Pourrions-nous avoir l’addition, s’il vous plaît ? "
-  This translates to “May we have the check, please?”
-  French waiters do not tend to come by to check in on tables as often as in American restaurants, so if you have finished your meal and are waiting for a long period of time, feel free to wave your hand to the nearby waiter.
-  Remember that it is very rude, however, to use the stereotypical “garçon” when calling for a waiter. Although it may be done in Hollywood, it is disrespectful to the French.

French customs when dining at a restaurant

There are customs when dining in France that may be subtle, but are important to follow out of respect.

Although in English there is only one way to call someone by the second-person pronoun “you,” in French, as you most likely know, there are two. There is “toi/tu” and “vous.”

As a rule of thumb, when you are dining in a restaurant always refer to those working (such as waiters, hosts, cooks) by vous.

Of course, there are always exceptions.

The “vous” is used out of respect and politeness. You use “vous” with anyone you do not know well, or with anyone significantly older than you.

If you are noticeably older than the waiter, for example, by at least 30 years, you may refer to them as “tu/toi.” They would still refer to you by “vous,” as a sign of respect.

“Travaillez-vous ici?”
- Do you work here?

French people also tend to eat late and will often arrive at 8 or 9PM at a restaurant for dinner.

About tipping in French restaurants

A tip, in French, is “pourboire,” which literally translates to “to drink.”

That said, if you enjoyed a service and want to leave a “pourboire,” feel free to leave a few euros on the table when you are about to leave. The etymology of “pourboire” is to say that the tip is for the waiter to themselves a drink.

About French appetizers, entrees, and desserts

There is a nuance in the French language which is important to note for all English-speakers. In France, “une entrée” are appetizers, not the main dish. The main dish will be “le plat principal”, while in English this would be translated to “entrée.”

Dessert is spelled the same, but it is pronounced with an “s” sound, not a “z” sound, like in English.

In French restaurants, you will often have a menu option. This means choosing from a specific list an appetizer, entrée, dessert, and possibly a drink, for a fixed price. The menu is usually composed of the restaurant’s specialties or of traditional selections.

French food names you should know when traveling to France

If you want to truly know any culture, the best way is to experience it. In the case of France, this means trying out its culinary marvels and regional delicacies.

French cuisine is one-of-a-kind. It centers around a small set of ingredients which it perfects in its dishes. Whenever I go to France, there are certain foods I always order in my first days at the restaurant, bakery, or street shack nearby.

Whether you are in Paris, Normandy, Marseille, or the Pyrenees, there are always regional specialities to discover when you travel across France. To ask what the regional specialties are, you can say, “Quelles sont les spécialités de la région ?”

Any good French bistro or brasserie will have this meal “à la carte.”

The famous “steak-frites” is a beautiful cut of meat, pan-seared to perfection, accompanied by a sauce and hand-cut, crispy fries. A classic sauce will be the “sauce au poivre vert,” or green peppercorn sauce.

To accompany your steak, ask for a glass of red “Côtes du Rhône,” a full-bodied red wine from the south-eastern region of France.

You may also want to ask for the establishment’s recommendations of wine to go with the steak. To do this, practice asking, “Quel vin rouge recommandez-vous comme accompagnement?” after ordering your main dish.

If you would like your meat rare, ask for the steak to be “saignant,” meaning bloody. If you are looking for a medium-rare steak, you can ask for “cuisson à point,” otherwise, well-done would be “bien cuit.”

It is important to note that it is less common for servers in France to ask for your meat preferences and are likely to de-facto serve you a rare finish. While in America customers will often order well-cooked meat, the French rarely eat a steak which is less than bloody.

Bouillabaisse is a traditional, Mediterranean seafood stew made of a mixture of different local fish and crustaceans. It is seasoned with just a few ingredients from the region: citrus, black pepper, olive oil, and salt. If you travel to Marseille, any seaside restaurant will serve this stew. You can finish your meal alongside the port with a glass of the anise-flavored drink pastis.

If you would like to know what a particular bouillabaisse is made of, you can ask your server: “De quelles sortes de poisson est faite votre bouillabaisse?” If you are near the Mediterranean in the eastern part of France, some typical fish may be girelle, rascasse, or Saint-Pierre. In the bouillabaisse you will also find mussels (“moules' '), shrimp (“crevettes”), and prawn (“langoustine”).

Other traditional French seafood dishes include moules-frites and coquilles Saint-Jacques, or mussels with fries and scallops.

You can always ask at the end of your meal for “la liste de desserts,” the dessert menu.

If the restaurant does not have a Paris-Brest on their menu, this dessert is worth scavenging every patisserie you pass by to try. The hazelnut-mousse and biscuit layered patisserie is a classic French delicacy. It refers to the cities of Paris, in the northern part of France, and Brest, which is near the Western tip of France in the Bretagne region. 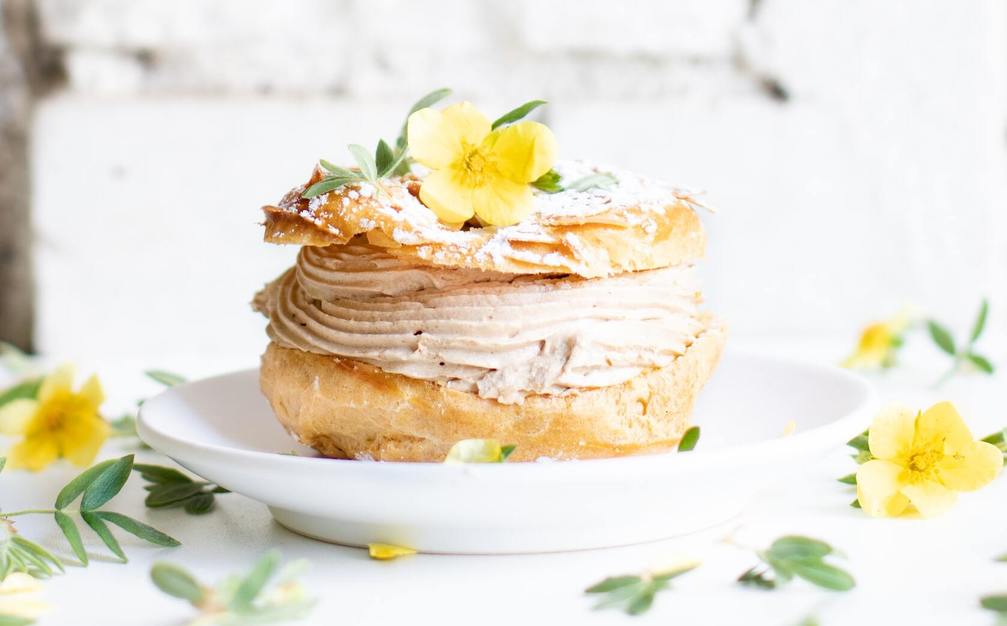 You can always ask the waiter, "Où est la pâtisserie la plus proche d’ici ? " meaning, « Where is the closest bakery from here?”

Because these are specialties, you will likely only find them at a “patisserie” or “boulangerie-patisserie,” rather than a simple bakery. A bakery will specialize in bread and “viennoiseries,” which are classic puff-pastry goods such as croissants and chocolatines. Patisseries will specialize in complex pastries and may have a more limited choice in bread.

If the patisserie does not have any Paris-Brest, ask for a “mille-feuille” or an “éclair au chocolat” which are classic and unavoidable pastry staples in France.

Espresso to finish the meal

It is a custom for French people to have an espresso after they finish their meal.

French people rarely drink filter coffee, and it is almost never served in French restaurants. If you would like a more diluted coffee, you can ask for “un allongé,” which is an espresso to which they add extra hot water. For a double allonge, ask for “un double allongé.”

For an espresso with crème, you can ask for, “un café avec de la crème.” Espressos will always be served with two small cubes of sugar.

French phrases for thanking your waiter at a restaurant

When you finish your meal, do not forget to thank your waiter.

“Merci, nous avons adoré le repas !”
“Thank you, we loved the meal!”
(here are more phrases you can use to compliment someone in French)

“Merci pour ce délicieux repas. Nous reviendrons à votre restaurant.”
“Thank you for the delicious meal. We will come back to your restaurant.”

“Merci, bonne soirée !”
“Thank you, have a wonderful night!”

The value of dining in a French restaurant lies not just in the food, but in the cultural experience it represents. It is a moment to share a meal with people you care about, support local businesses, hear the bustling joy of late evening dining room conversations, and get to know first hand why French restaurants are adored.