How to express emotions and feelings in Italian

Italians are usually direct communicators. They tend to express their emotions and feelings explicitly, and expect other people to do the same. Indirect messages are a red flag when dealing with Italians!

That’s why, when learning Italian, it is necessary to be able to express emotions and feelings properly. This is the only way to avoid misunderstandings and miscommunication.

Moreover, fluency comes also with the development of an emotional vocabulary. To master a language, we need to go beyond the surface. Between “feeling good” (sentirsi bene) and “feeling bad” (sentirsi male) there are many other shades of emotions.

How do you say in Italian “I feel disgusted” or “I feel grateful”, for example? 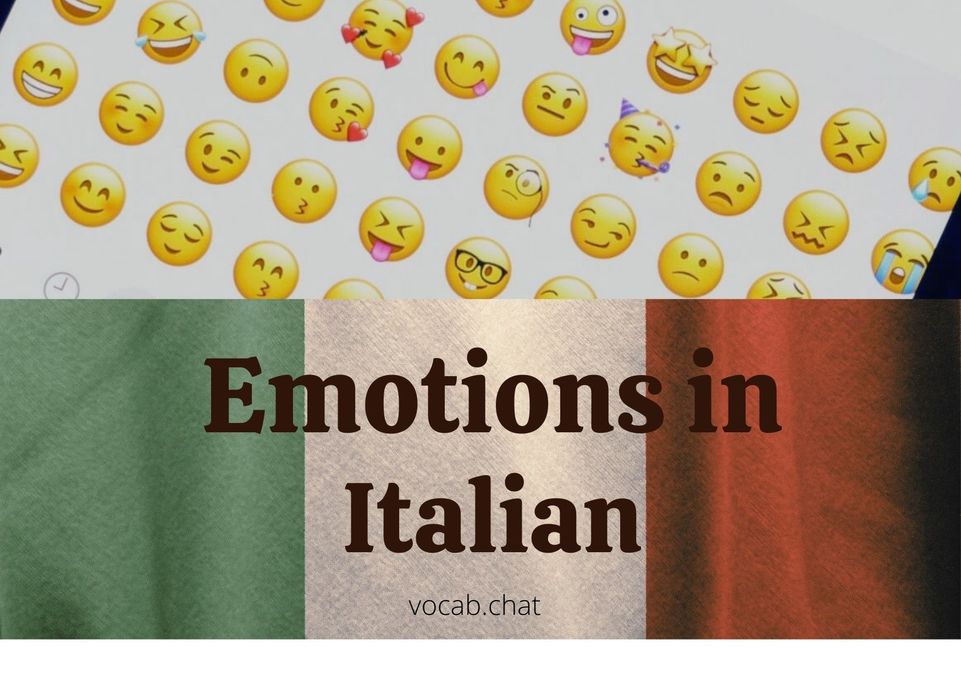 Asking about someone’s emotions in Italian

Any functional conversation is based both on questions and replies. So, before learning some replies, it is worth going through some questions as well. In Italian, there are a number of ways to reach out to people and encourage them to expose their emotions and feelings.

Here are the most common ones:

“Come va?” is a nice conversation starter, just like the English “what’s up?” or “how are things going?”

Typically, “Come va?” is used when you don’t really want to investigate the other person’s emotions, but maybe just have a chat or discuss something specific. If that is the case, it is okay to ignore the question, and move on to the actual point of conversation.

Otherwise, some appropriate answers would be:

You decide whether you want to stay somewhat vague or be more precise!

You might already know the phrase “come stai?”. It means “how are you?”, and it leaves room for a variety of replies.

When asked “come stai?”, one can either share one's emotions or make use of the non-specific answers mentioned above. Some other answers could be:

If you are truly interested in someone’s emotional state, you’d rather ask “come ti senti?”, which means “how are you feeling?” or “how do you feel?”

Unlike the previous ones, this is a well-focused question. It suggests a certain care about the other person’s inner world, and it is mostly used to follow up on something that happened to them.

In other words, with this phrase you are checking on your interlocutor to verify how they are coping with some occurrence.

It can be the loss of a loved one, a surprising finding, a bad rainy day…

However, the occurrence doesn’t need to be necessarily a negative one! If your Italian girlfriend just got promoted, “come ti senti?” would do the job too.

The occurrence can also be an imaginary situation. If the goal is to learn how the other person would feel in a specific hypothetical circumstance, “come ti senti?” is the card to play.

40 phrases for expressing feelings and emotions in Italian

The emotional reaction when not invited to a friend’s party really varies from one person to another. Disappointment, sadness, anger, indifference…and much more. What’s more is that we finally get to find out how to express these emotions in Italian!

Feelings and emotions are far from being perfect systems. We may feel a little sad, or very discouraged, so it is important to be able to express to what degree we feel sad or discouraged. How to do that in Italian?

« Molto » means very. So, in case you not only feel nervous, but very nervous, you would say: molto nervoso/a.

« Abbastanza » represents the middle ground. What if you feel quite confused? Italians would say that you feel: abbastanza confuso/a.

When expressing how you feel, in order to form a correct sentence, you need to pay attention to a couple of grammar rules.

1) Choosing the right verb to express feelings in Italian

The verb to use when talking about emotions is «sentirsi», the reflexive mode of the verb «sentire». It means 'to feel', but it can also mean 'to hear', 'to smell', 'to listen', and more.

As always, the context will suggest the right translation of the verb. If the semantic field is ‘emotions’, then it goes without saying that it stands for ‘to feel’.

However, there is another verb that is used when expressing emotions and feelings in Italian: «essere» (to be). “Sono felice” is grammatically correct as well.

In addition, the verb «sentirsi» recalls the fascinating universe of emotions, as well as your relationship with them. It’s more romantic, in a way!

2) Adjectives and their endings

Expressing emotions in Italian relies on using adjectives. Since Italian is a highly gender-based language, adjectives agree in gender and number with the noun they refer to. Italian is similar to French in this respect.

Masculine nouns usually end with -o when singular, and with -i when plural. Therefore, the corresponding adjectives will have the same endings.

Feminine nouns, instead, usually end with -a when singular, and with -e when plural. The corresponding adjectives typically have the same endings.

Gender agreement is a tough Italian grammar topic. In fact, plenty of exceptions have to be taken into account. For instance, there are a number of adjectives that end with '-e' when singular and with '-i' when plural, regardless of the gender of the noun they refer to.

The above-mentioned adjective «felice» (happy) is one of those:

After this final grammar chapter, you are ready to express your emotional state in Italian. Our wish for you: open your heart, be vulnerable!