The author is a native English speaker who learned Dutch for 5 years, and after that moved to Germany. In this article, he discusses the similarities between Dutch and German, and how those made it much easier for him to learn German.

As I walked to my German A2 course for the first time one brisk September morning in Berlin, I was feeling a tad trepidatious. While I knew the basic German greetings from my previous visits to the city which I now call home, I had never taken a German language course before.

Yet here I was, strolling straight past the A1 Level, as though I already knew it all. I felt like an imposter.

"You'll be fine! You know Dutch." The reassuring words of my partner rang in my head as I neared the German language school. But I wondered if any confidence I might perceive in myself wasn't just hubris.

I knew there were similarities between Dutch and German. But could enough overlap really exist to save me from making a fool of myself?

I took my seat, and the language class began. My teacher spoke only in German, and my classmates nodded along in perfect sync with the stream of sentences flowing from her mouth. Remarkably, so did I.

Could I understand the nuance of every word? No. But what the teacher said wasn't gibberish. I could tell where sentences began and ended, and enough of the German vocabulary words were similar to Dutch that I could figure out a lot through context.

Maybe I wasn't an imposter after all. 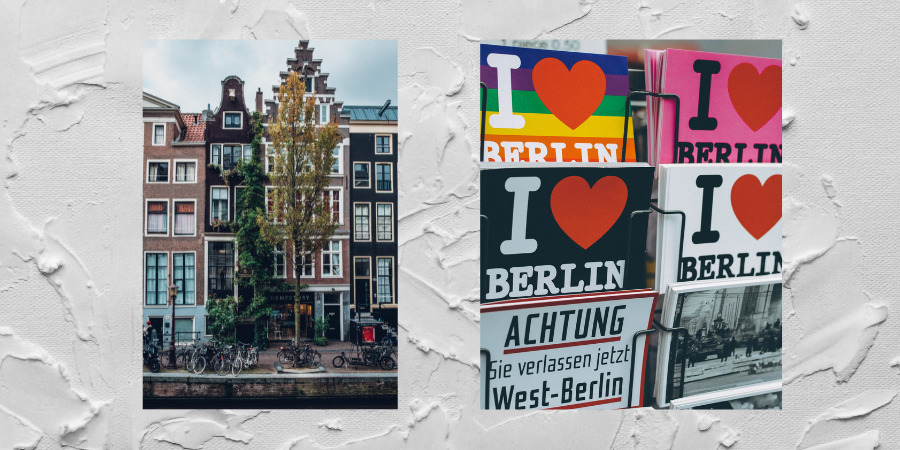 left: a traditional house overlooking a canal in Amsterdam
right: postcards in Berlin

The Similarities between Dutch and German

On that fateful day in Berlin, I had already been speaking Dutch for five years. So, whatever success I experienced on my first day of class should be considered with that as a caveat.

As time went on, and my understanding of German grammar improved, listening and following along during class only got easier.

Still, anyone even somewhat familiar with Dutch should have an easier time than most learning German, and vice versa.

German and Dutch are in the same linguistic family, known as Germanic languages. In spite of having major differences, these two languages share many characteristics both lexically and grammatically.

A useful way to think about their similarities is to observe how German and Dutch are different from another Germanic language: English.

To understand how the German and Dutch languages relate to English, see the following articles:

Dutch and German: similarities in vocabulary

The close relationship between English, German and Dutch can be seen (but not as easily heard) with words and phrases like:

While Dutch has more in common with English vocabulary than German does, there is significantly more overlap in the lexicons of German and Dutch than either one shares with English. Consider the following words:

Of course, any list of examples only begins to scratch the surface. To be more succinct, the lexicons of German and Dutch overlap in a way similar to those of Spanish and Italian.

Dutch and German have similarities in grammar and syntax

Simple German and Dutch sentences that use the present tense follow the basic subject-verb-object structure used in English.

In constrast to English, sentences in German and Dutch change their word orders frequently. For instance, when a sentence begins with an adverb like "yesterday" or "actually," the verb should come before the subject of the sentence, like so:

The suffix '-lich' in German and the suffix '-lijk' in Dutch have similar pronunciations, and they are typically used to denote adverbs. They are like the suffix '-ly' which is often added to English adjectives to construct adverbs.

German and Dutch sentence structure also changes when auxiliary verbs are used. Auxiliary verbs, sometimes called "helping verbs", are verbs like "have" or "seem", which require the use of another verb, in the infinitive form, to complete the statement:

Note that in the German and Dutch versions of the statement, the verbs «sehen» and «zien» ("to see") are placed at the end of the sentence.

Returning to the first day in my A2 German course, the grammar lesson that morning was on constructing sentences using the conjunction «weil» («because»). I already knew how to do this using the Dutch equivalent: «omdat».

In this case, the verb of the secondary clause always goes to the very end of the sentence.

When I was first learning Dutch, this grammar rule proved very confusing. But by the time I started learning German, I had already thoroughly internalized it.

My prior knowledge not only made it easier for me to transfer the concept to German but was also key in helping me follow along with my teacher during class that morning.

Even though their vocabularies are very similar, many of the words and phrases that German and Dutch share can be described as "false friends".

This linguistic phenomenon occurs when two words or phrases in two different languages have exact or similar forms but entirely different meanings.

I always think of one in particular on hot summer days, riding the train to visit one of the many lakes in Berlin for a swim. In German, the word for «lake» is «See», while the word for «sea» is «Meer». Meanwhile, in Dutch, «meer» means «lake» and «zee» means «sea.»

Other German-Dutch vocabulary false friends include:

While these German-Dutch vocabulary false friends might seem to make things confusing, I have found that they lend themselves well to creating fun mnemonic devices to help me keep them straight.

German and Dutch: the differences

German and Dutch clearly have significant similarities, but their differences are much more numerous. They are distinct languages, after all.

Dutch and German utilize many of the same sounds, but they have vastly different rules for spelling.

When reading Dutch, one notices the frequent use of vowels and unfamiliar letter combinations, while German's dauntingly long words and regular use of umlauts tend to intimidate new learners.

Some basic German-Dutch spelling and pronunciation differences are as follows:

Generally speaking, the rules of German grammar are much more complicated and complex than those of Dutch. Take the following examples, for instance:

Which is easier to learn—German or Dutch?

Anyone looking to learn a new Germanic language might be tempted to choose Dutch—given its simpler grammar rules—over German. But any language will always present its own unique host of challenges to a new learner.

So, it is important to weigh all the factors when deciding which language is worthy of your efforts.

While the simpler grammar of Dutch may make it seem more enticing than German, what about the complex new spelling rules you will have to master as well?

Furthermore, getting lots of practice is key to language acquisition. Seeing as the 120 million German speakers in the world far exceeds the roughly 20 million Dutch speakers, might it be easier to find people to practice your new language with if you go with German?

In the end, you can rest assured that whichever of these two languages you choose, it will give you some meaningful knowledge and skills to help you navigate the other.

By Zachary Lussier
Zachary studied at the Buddhist-inspired Naropa University and graduated from the University of Rhode Island. His experience with language learning includes working as a TEFL teacher, learning Dutch and moving to Berlin, Germany.
Share