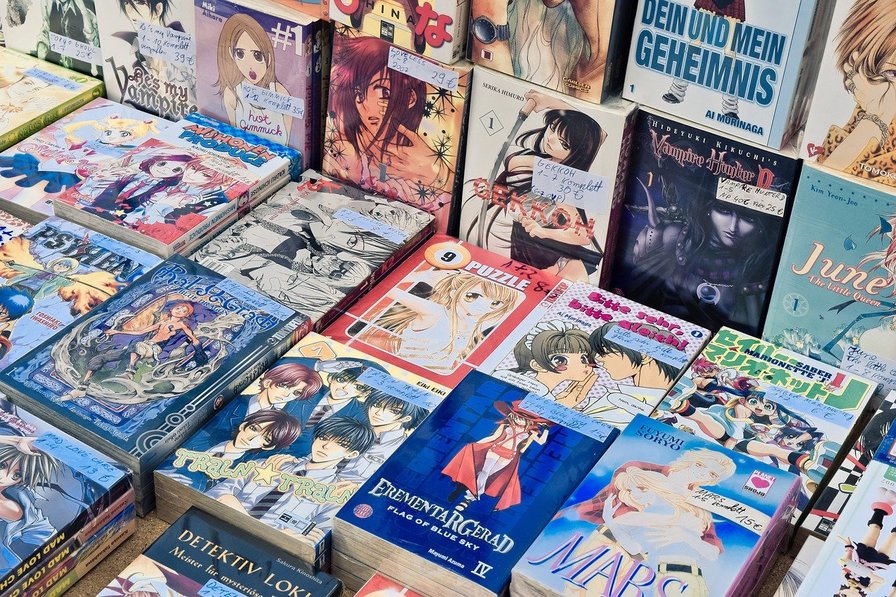 In recent years, the sales of comic books and graphic novels have been struggling. As the US’ industry has slowed to a crawl, people have begun to read and enjoy 漫画 instead. 漫画 (Manga), sometimes written as マンガ (Manga), are Japanese comics and graphic novels. They differ from their American counterparts in art-style, genre and target-audience. There are a huge variety of stories available with something for everyone.

That isn’t just lip service either. Whilst a large portion of 漫画 readers are of the younger generation, older generations are continuing to read, with new 漫画 being made to specifically target older audiences. Also, with popular series such as ワンピース (One Piece) being translated from Japanese into over 10 foreign languages, it’s very much become a global phenomenon that anyone can enjoy. If you want to know more about 漫画 and how to find the right story for you, then keep reading, as we’re going to break it all down here.

Much like other 本 (Hon – Books), 漫画 have different genres and target demographics. The genres are generally similar to those of 本, but the demographics are slightly harder to understand. Let’s run through them.

少年 (Shounen – Young boy) – 少年漫画 is targeted at boys in their teens. These stories tend to focus on action and comedy, often staying light-hearted. Some famous examples of 少年漫画 would be ドラゴンボール (Doragonbooru – Dragon Ball) and ナルト (Naruto).

少女 (Shoujo – Young girl) – The female equivalent of 少年, 少女漫画 is more focused on romance, drama and beauty. Stories often center on the growth of a character as they slowly become more adult. The most famous example of 少女漫画 outside of Japan would be セーラームーン (Seeraamuun – Sailor Moon).

青年 (Seinen – Young man) – The adult version of 少年, 青年漫画 appeals to men ages 18 and up. 青年漫画 tend to have a darker tone to their stories, with protagonists often having to deal with dark, graphic or sexual situations. Foul language is fair game in these stories too. アキラ (Akira) is a well-known 青年漫画 that got an アニメ (Anime – Animation) adaption, which led to the popularization of アニメ in western countries.

女性 (Josei – Female) – 女性漫画 target the adult female audience. Once again, common themes here are romance, love and character growth. The stories have a more mature, and often realistic, tone. NANA- is a famous example of work from this demographic. Featuring two girls called Nana, the story follows their lives in Tokyo as they make various life-changing decisions, both good and bad. It’s a popular story, and one that is hard to put down.

子供向け (Kodomomuke – For kids) – This demographic is more easy to understand. Aimed at kids, 子供向け漫画 are short, sweet and fun. They can be enjoyed by all ages too! A great example of this would be the ポケットモンスター (Poketto monsuta - Pokemon) series that are loved by both young and old.

Now, whilst 漫画 does primarily try to appeal to its target demographic, that’s not to say that other people don’t enjoy them too. People enjoy a variety of stories, so don’t be afraid to try a 漫画 you’re interested in just because of its label.

How do I read this…?

You’ve finally picked out a 漫画 you want to read. You open the book up and start reading, but nothing seems to make sense. Sound familiar? You’re probably reading it the wrong way!

In Japan, books are generally written from right-to-left, top-to-bottom. 漫画 is the same way, so be sure to start from the right side of the book, not the left! However, some translation companies change this so that you read it as you would a normal comic book. The easiest way to find the start is to open the 漫画 from the front cover and read from there.

You might think that buying 漫画 would be the same as buying books, but the way that they’re published and sold can be different depending on the series! Let’s discuss the different ways that 漫画 is sold.

漫画 first get printed in their publisher’s マガジン (Magajin – Magazine). These マガジン contain the latest chapters of many stories, and are often over 200 pages long! 漫画マガジン can be a great way to find new stories and they’re excellent value for money. However, the paper they use tends to be low quality, so your favorite story might not look it’s best here.

Once enough chapters have been released in a マガジン, some of the chapters of a series are collected and published in a 単行本 (Tankoubon – Volume). These 単行本 have higher quality paper and printing compared to the マガジン versions. 単行本 sometimes have extra stories or chapters. These are also the same editions that get translated and sold abroad, so foreign fans will recognize them.

Reading 漫画 digitally has also become a popular option for readers. Whether it’s on your phone or your computer, there are websites and apps for you to read your favorite 漫画 on. Even better, you can often read the latest chapters for free! The bigger publishers also offer translated versions of their work online too, so foreign fans get to enjoy the benefits of reading digital too!

What to read next…

Choosing your next 漫画 to read can be a tough decision! There are a lot of websites that allow people to make their own recommendations, and digital 漫画 websites often have a list of ‘hot’ new manga that are popular. If you want my おすすめ (Osusume – Recommendation), then I would suggest 聲の形 (Koe no katachi – A Silent Voice) or 僕のヒーローアカデミア (Boku no hiiroo academia – My Hero Academia) as some of my personal favorites. Happy reading!