10 Reasons I Won’t Exchange The Philippines For Any Country

Many factors make the Philippines a beautiful place to live in. The striking sceneries, the people and their values, the culture and rich history of the country—all these contribute to the Philippines being a go-to destination for many.

Perhaps you’re a foreigner who has heard many good things about the Philippines and would want to visit the country soon. Or maybe you’re of Filipino descent who grew up abroad and has never set foot on the islands. You’re thinking of visiting the country soon and would like to know more about its people and culture. If you’re that person, then this entry is for you.

There are no words to describe the beauty of the country and its people, but after this post, I hope you’ll be convinced that, Maganda talaga ang Pilipinas! (« The Philippines is beautiful indeed! »)

Here are the top reasons that I love the Philippines (and why you will, too)

The Philippines offers a cultural diversity like no other in Southeast Asia. One can say that the Philippines defines diversity itself. Visiting the country will guarantee anyone a unique experience. One reason is the fact that the country has around 170 ethnolinguistic groups. Every island in the archipelago offers unique cultural traditions, most of which carry Spanish, Malay, Hindu, and even Arab influences.

Visit places like Intramuros and Vigan to enjoy Spanish architecture preserved since three centuries ago. Travel to the Ifugao Province in the north to experience traditional Filipino culture. Head south to Lake Sebu in Mindanao to experience first-hand the culture and tradition of indigenous people in the region.

Want to experience the country’s metropolitan life instead? That’s where Manila, Cebu, and Iloilo City come in. And that’s just the tip of the iceberg!

Part of living in a country influenced by different cultures is being able to enjoy an assortment of cuisines. Filipino food may not be as well known as Italian, Japanese, or Indian food, but you will never find anything like it elsewhere. In the Philippines, people eat five times a day. We start the day with a cup of coffee and some pandesal (salt bread). Afterwards, we eat a full breakfast of rice and some viand. Don’t forget about snack time a couple of hours before lunch. After lunch, we make sure we could get some snacks in the form of kakanin (a general term for glutinous rice cake).

When the clock strikes six in the evening, it’s time for the family dinner. I would hear the moms calling, Hapunan na! (“It’s dinner time!”).

Chicken adobo (chicken meat simmered in a marinade of soy sauce and vinegar) or tinolang manok (Chicken soup) is usually what's served at this time. And for most people, the day doesn’t end until they’ve had some midnight snacks.

What makes food and eating unique in the Philippines, though, is that we treat every mealtime as family time. In the Philippines, eating is all about socializing. We are not used to eating alone. We feel that there is something about eating with dozens of other people. We would rather that we don’t have all the food for ourselves as long as we have our family and friends eating with us. 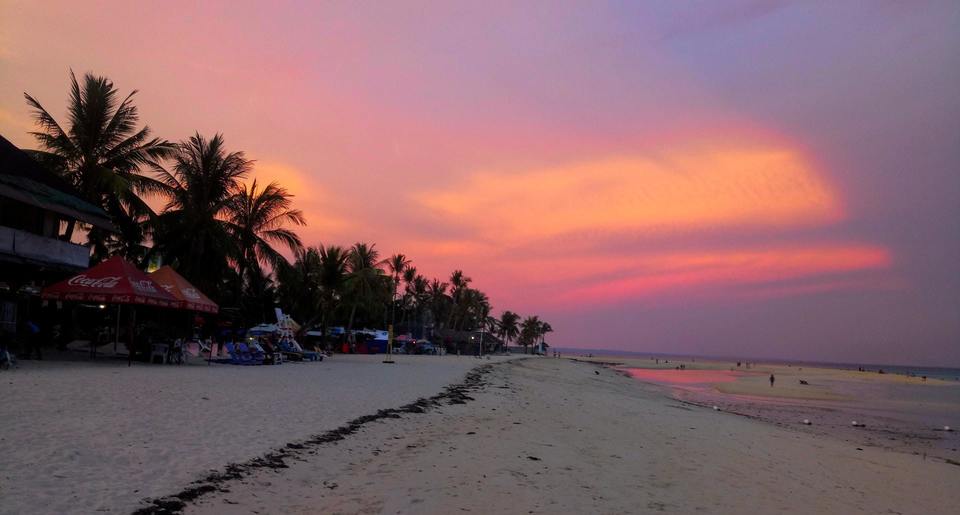 The unique traits and characteristics of Filipinos and the values they hold dear are what make the Philippines truly beautiful. However, you can’t deny that people visit the country because of the location of the country itself. While we have an abundance of rainfall here throughout the year, we also have the best summertime, thanks to the stunning beaches we have on every island of the archipelago!

Most of the beautiful beaches are on the Visayas, though. There, you’ll find Boracay in Panay island and El Nido in Palawan. Want to go surfing? You read that right. Pinoys love surfing, too! The best surfing spot in the country is in Siargao, of course.

Filipinos themselves enjoy the privilege of having a nice climate and astonishing beaches to go along with it. We love the idea of leaving for the beach on weekends. We’re excited to see the ocean or to take a road trip with family or friends. Above all else, we just love the idea of the preparation that entails heading to the beach to relax and unwind.

Filipinos Are The Friendliest

Filipinos pride themselves on being some of the most hospitable people in the world. History and sociology textbooks in our schools often place “hospitable” as the number one trait of the Filipino people. One reason foreigners visit the country a lot is that Filipinos are not xenophobic at all, but are always friendly to newcomers. If you’re learning the Filipino language, there’s no better place to learn it than the Philippines. Why? Because even strangers on the streets will not hesitate to teach you for free if they learned you’re interested in learning Filipino.

Not only that, but we are also friendly and helpful to our fellow countrymen. We have a custom known as the bayanihan. The term is derived from the Tagalog word bayan, which means ‘nation’ or ‘community’.

In the past, the bayanihan was associated with a group of Filipino men carrying a bahay kubo (nipa hut) on their shoulders to help a neighbor move their house. This may be seen rarely nowadays, but this doesn’t mean the bayanihan spirit is dead. Even today, bayanihan remains a fundamental aspect of Filipino culture where we work hand-in-hand to achieve a common goal.

Whether you’re a foreigner or a Filipino, you can expect help to always be on your side when you’re in the Philippines.

Another trait of the Filipino people you will surely love is the way they value togetherness and unity. The word pakikisama is derived from the verb sama, which means “to accompany.” This trait goes beyond the act of accompanying someone, though, but entails a deeper sense of kinship and camaraderie.

When one goes to a party, everybody goes. When one has to stay behind, everybody stays behind. Thus, we have a saying that goes, Walang iwanan, which literally means “No leaving behind anyone,” or more properly, “No one left behind.”

We have an expression in the Philippines that has no direct equivalent in most languages. It’s Bahala na. Even Google won’t translate it for you. Some say it’s from the Sanskrit word bharana, which implies that there is someone being responsible for you, to sustain and nourish you.

More than just being an expression of fatalism, Bahala na, or «Come what may», is an expression of optimism and faith in God. In a sense, it means, “I won’t worry because God will take care of me.”

It’s not uncommon to hear Filipinos exclaim, Wala na tayong bigas. Bahala na! “We have no more rice. Come what may!”

This is the reason why it seems Filipinos are so resilient. There’s something inside every Filipino that causes them to rise up above any challenge. The Philippines may not be a rich country in terms of its economy, and yet, you will see most Filipinos always smiling even amid adversity.

Family is first for every Filipino. In the Philippines, it’s not unusual for families with members up to the third generation to live in the same household. This is one practice we have that makes us distinct from other cultures.

In Western countries, children are forced to live on their own once they are old enough. In the Philippines, houses are usually designed so that they can be renovated in the future to accommodate more members in case anyone marries. In other cultures, elderlies are sent to nursing homes. In the Philippines, we don’t have a lot of nursing homes because we expect our elderly to be living with us until their last breath. Grandparents even play a major role in the raising of our children.

It’s also not uncommon in the Philippines for someone to call non-relatives tito (uncle) or tita (aunt). We often refer to people we don’t know with familial terms. We call our neighbor’s grandpa lolo (grandfather) as if he were our own grandpa. That’s how we value family and relationships.

In the Philippines, we keep our family intact for generations, and we work hard for one reason and one reason alone—family.

Speaking of work, Filipinos are among the most hardworking people in the world. The fact that around 2.2 million Filipinos are working abroad as overseas contract workers is one proof of this. You can call us workaholics, but we simply won’t stop working until we’ve felt we’ve done what we needed to do. But we simply don’t work for the sake of working. We are excellent workers too, and happy workers at that.

Have you seen our rice farmers? They don’t earn that much doing what they do, but they can work all day just to make sure they can feed not only their families but the entire nation.

We have a folk song dedicated to farming. One of the lines goes, Magtanim ay ‘di biro, maghapong nakayuko. (“Planting rice is never fun, bent from morn till the set of sun.”)

Not only are Filipinos hard-working, but they’re very creative too. Our ancestors have taught us to take advantage of our surroundings. That means we can make use of whatever resources are available to us. In the Philippines, it’s not unusual for a person who’s fully employed to have multiple side gigs. That’s how industrious we are!

The giving of respect especially to elders is a distinct Filipino tradition and value. This is often shown by a gesture known as pagmamano. This gesture is done by taking the right hand of the other person (usually someone who’s much older) and touching the back of their hand on one’s forehead.

This practice has its origins in the hand-kissing gesture used in Europe where a person would kiss the hand of a royalty or a religious leader to show courtesy and respect. It also started that way in the Philippines, but the practice has evolved into pagmamano, which is also a way of asking an elderly person to bless you. When a young person says, Mano po or Pa-bless (“Please bless me.”), the elderly would often respond with, Kaawaan ka ng Diyos (“May God have mercy on you.”).

Aside from this, Filipinos also often use the terms “po” and “opo,” as you’ve probably noticed in the expression Mano po. These are used as polite and respectful ways to convey agreement or compliance to a command or request.

Filipinos Have Debt of Gratitude

Remember when I said Filipinos are helpful? Contrariwise, Filipinos are also good at receiving help. And how is that? Here in the Philippines, we always return the favor we were given. When someone has helped us in the past, we see to it that we return the favor in one way or another in the future. This trait shows how responsible Filipinos are in repaying good deeds. We call this utang na loob or “debt of gratitude.”

The Philippines is not a perfect country. The country and its people need some serious development in various aspects. Even the positive traits I’ve shared here have a dark side to them.

The resilience of Filipinos, for instance, is often taken advantage of and glorified to cover the incompetencies of the government. The expression bahala na is also abused by Filipinos themselves, using it as an excuse for laziness and mediocrity. The same is true with utang na loob, which is sometimes invoked to demand favor from or to manipulate someone.

But despite its imperfections, the Philippines will always be number one in the hearts of Filipinos here and abroad. Beyond the picturesque sceneries, the superb cuisine, and the wonderful climate, it’s the values and traits that Filipinos hold dear that make the Philippines a true beauty.

And whether you agree or not, it’s truly more fun in the Philippines!